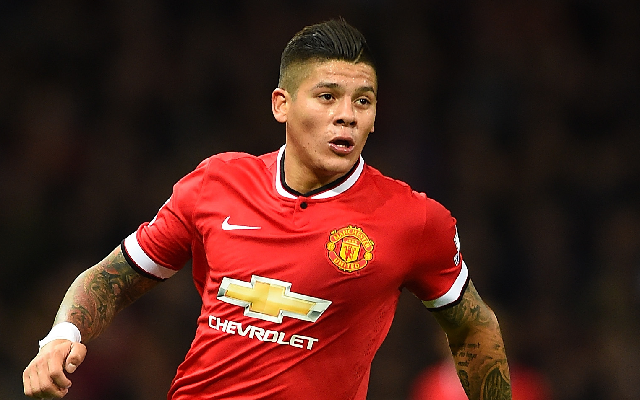 Just when Manchester United thought they were escaping the scares of injury this season, they have been thrown into a more difficult situation with Marcos Rojo’s dislocated shoulder which could rule him out for more than 6 weeks.

It was a wave of despair as Rojo was stretchered out during the Red Devils defeat to their city rivals, Manchester City at the Etihad stadium and in fact the Argentine needed an oxygen pipe at some point.

After several rumours, physio tests have indicated that Rojo sustained a full dislocation on his shoulder and even though his return date is stated at some six weeks from now, it could be much longer depending on whether Marcos Rojo tore or stretched the ligaments that held his shoulder in place.

It was tough for the Old Trafford faithful not only because they fell to a 1-0 defeat last weekend but because they knew how difficult their subsequent games will be without any of their regular central defenders and it was refreshing to read the 24-year-old’s tweet just the day after the derby where he played down the seriousness of his injury. The Argentine tweeted:

‘Gracias a todos por los mensajes. Gracias a dios fue solo un mal momento/ thank you all for your messages. Thank god it was for nothing.

Several sources have attributed the confusion in Rojo’s statement to his limited knowledge of the English language which is understandable as he has just been in the country for barely 2 months. The sources claim that the English translation does not do justice to the extent of his injury situation and produced a corrected translation of the last portion of the tweet reads:

‘Solo un mal momento actually means ‘only a bad moment’ as against the ‘nothing’ that Rojo had implied and this has suggested that the defender’s condition might be worse that earlier thought.

The defender was discharged from the hospital later that Sunday and Manchester United confirmed that he had suffered a dislocation.

To worsen the confusion, the defender’s father told an Argentine TV station that: ‘The injury is not too severe. He will miss two or three games.’

The implication of this development is that Louis van Gaal will have to resort to his youth team defenders to bail the team out in subsequent matches.

Chris Smalling will have to serve his one match ban and Phil Jones and Jonny Evans are serious doubts for the clash against Crystal Palace next Sunday.

The manager will be left with the choice of fielding Michael Carrick and either of Paddy McNair and Tyler Blacklet in the centre-back position.

Carrick who had been side-lined for over six months made a return as an emergency centre-half and Sport mail revealed that Louis van Gaal had intimated Carrick that he might have to help out with defensive duties once he recovers from his injury, so it wasn’t awkward to the midfielder when he got the nod to partner McNair against City.

Carrick who is more than ready to play as a defender against Crystal Palace this weekend stated that: ‘That position is not something I have played an awful lot. I have had spells of it, playing two or three or four games in a season, but if I need to play in the defence then fine. I have not had a lot of football recently so I will play anywhere, I don’t mind. Ideally we just need to get players fit and have more options to choose from.’

Carrick believes that that the team have what it takes to get them back up again and concluded that: ‘It is up to us now to have a big push and put ourselves right back up there again.’