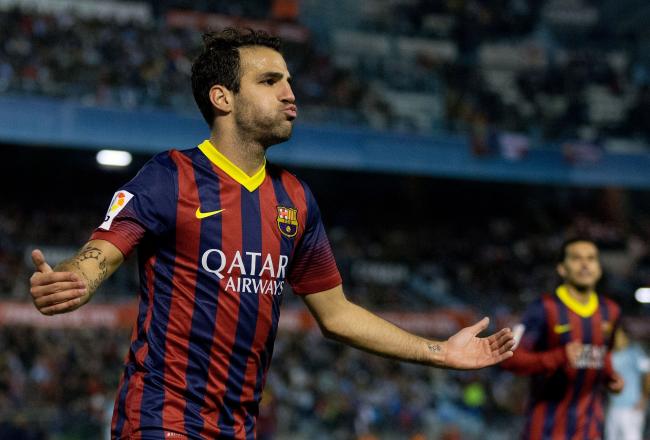 Just think back to last summer and all the stories you read about then manager David Moyes trying to sign Barcelona’s Cesc Fabregas for Manchester United.

In the end the 27-year-old stayed with the Catalan giants, but this summer looks to be a completely different kettle of fish after the appointment of new manager former Celta Vigo coach Luis Enrique who will embark on the clubs biggest overhaul of players since Pep Guardiola arrived back in 2008.

Star player Lionel Messi has just signed a new contract, and will not be leaving along with Brazilian star Neymar, but as for some of the clubs other big name players the future looks uncertain especially for Cesc Fabregas, Pedro and Alexis Sanchez who are all thought to be available for the right price, and have already in fact been linked with other clubs.

Wednesday mornings Catalan sports newspaper SPORT claim that Manchester United is preparing a €53 million bid for Fabregas after the Spanish international failed to nail down a starting spot in the first team, and that new manager Louis van Gaal will allow Fabregas the freedom to roam unlike at Barcelona where only Messi was given that privilege.

All this talk of Fabregas going to Manchester United has Arsenal fans asking the question of where they stand in regards to their former player with the general consensus being that the Gunners have a £25 million buy-back clause should Barcelona decide to sell him.

With Arsenal manager Arsene Wenger having a reported £100 million to spend this summer the 64-year-old Frenchman could do much worse than bringing Fabregas back to north London.

Fabregas could also be up for a move back to the Emirates if you listen to what he told Sky Sports about his love for his former club.

“Apart from Arsenal and Barcelona, I don’t see myself playing anywhere else,” he said. “I will definitely be going back (to Arsenal) whenever I have time to watch games and to see the guys, and you never know in the future, why not?”

The transfer market is poised to see some big moves this summer and while Manchester United could be a tough sell for the former Arsenal man, he could very well see it as a challenge that he would like to take.