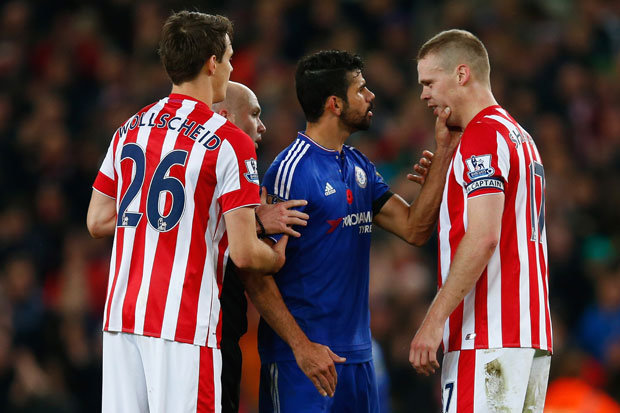 Manchester United captain Wayne Rooney is defending Chelsea striker Diego Costa, and encourages the Brazilian born Spaniard to keep on being the bad boy of the Premiership.

Costa was a star when he first arrived at Stamford Bridge from Atletico Madrid, with his 20 goals helping to secure Chelsea the Premier League title.

This season though things are not going so well for the 27-year-old who has made the headlines for all the wrong reasons with discipline problems being well ahead of the number of goals he has scored.

Rooney however was quick to jump to his defence despite his lack of scoring saying: “I think what Chelsea missed the season before was that fight up front and he gave them that. I strongly believe that’s why they became champions.

“I actually voted for Costa as player of the year last season because I think he was a huge player for them (Chelsea).

“Obviously it hasn’t gone as well as it did last season for him, but I think he is a fantastic player.”

So far this season Costa has actually been booked more times than the three goals he has managed to score, yet despite this Rooney says he must continue being the type of aggressive player that he is adding: “He’s a fighter and I think that’s part of his game and it’s going to be very difficult for anyone to ask him not to do that.

“I feel that’s in him – that fight. He thrives on that and that gets his team-mates going as well.”

Meanwhile England play Spain in a friendly in Alicante tonight, and Three Lions manager Hodgson says he has no special plans regarding how they will play against Costa , but has told his defenders to be prepared for Costa’s dirty tricks saying:”Costa for me is a good player, especially last year, he was very, very important to Chelsea.

“He is a very combative player, but we have combative centre-halves and they will just have to deal with that situation. I wouldn’t dream of suggesting he’s going to try underhand methods.

“Let’s hope he doesn’t and if he does we’re just going to have to deal with it and hope the referee deals with it like they do every week in the Premier League.”