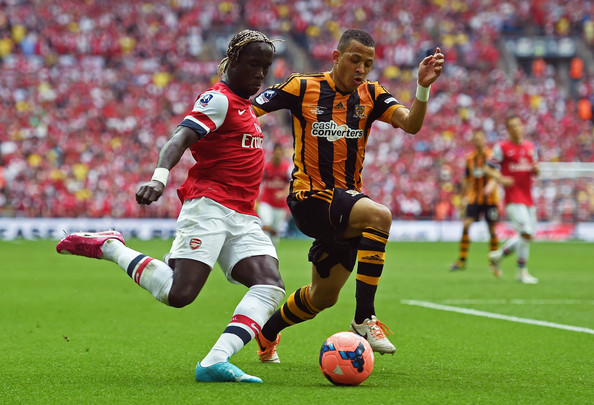 Manchester United are said to be preparing a move to sign Arsenal’s Bacary Sagna just as it appeared the out of contract Frenchman was about to sign for Manchester City according to the Sunday Mirror.City are confident that they will sign the 31-year-old on a four year £100,000 a-week deal after Sagna confirmed following the FA Cup win yesterday that it was his last match for Arsenal.United plan to lure Sagna by pointing out the fact he will have to play second fiddle to Pablo Zabaleta.Meanwhile incoming Manchester United manager Luis van Gaal is said to have no confidence in United’s current right-back Rafael, and will get his Dutch captain Robin van Persie to convince his former teammate to come to Old Trafford.Van Gaal knows that it is imperative to shore up United’s defence following the departure of Nemanja Vidic and Rio Ferdinand along with the uncertainty surrounding Patrice Evra the incoming coach will go after either Arsenals Thomas Vermaelen or Tottenham’s Jan Vertonghen hoping that his standing with them will be enough to join him at Old Trafford.