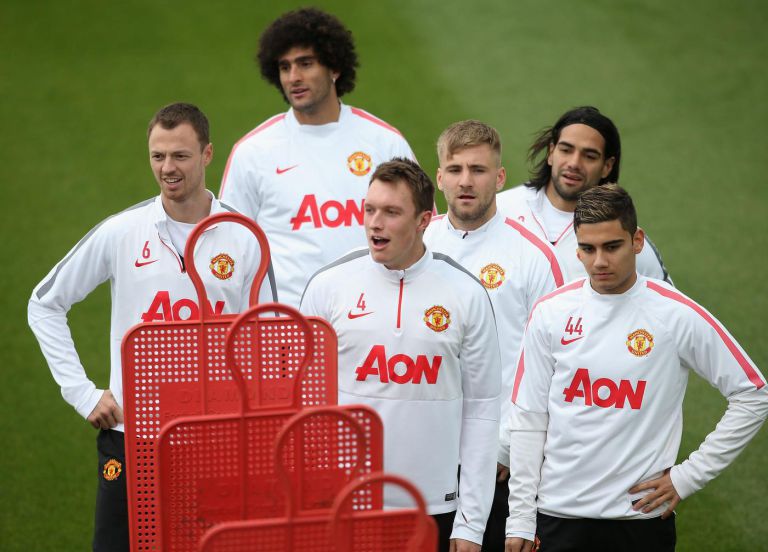 All Liverpool fans eyes will be watching Manchester United this afternoon when they take on Crystal palace at Selhurst Park hoping that the Red Devils will lose their fourth match in a row to give the Merseyside club a slim chance of piping them for a top-four finish and Champions League football next season.

Manchester United manager Louis van Gaal however received a huge boost prior to the game with four Red Devil defenders having returned to full-fitness.

Phil Jones, Luke Shaw, Jonny Evans and Marcos Rojo are all available for selection after having shaken off minor injuries.

This is great news for Louis van Gaal knowing that his team face a rejuvenated Palace full of attacking pace and confidence since the arrival of former Newcastle United boss Alan Pardew.

There still remain some worries for United despite the return of key players with the Dutch manager saying he has some players suffering with a virus, but when asked would not name who they are.

As for the team we expect LVG to put out, look for Luke Shaw to come in for Daley Blind at left-back to counter Palace’s pace down the wings with Blind moving into midfield.

We also expect to see Robin van Persie remain on the bench, while Wayne Rooney acts as a lone striker.

David De Gea will of course start in nets, with the away support no doubt telling him to sign a new contact with United and stop all the guessing about where he will be playing next season, while the young Spaniard hopes to keep a clean sheet for the first time in six games.

Chris Smalling and Phil Jones will be at the heart of the back-four while both Luke Shaw and Antonio Valencia will be given the important task of curtailing Yannick Bolasie and a fired up Wilfried Zaha looking to punish his former club for letting him go.

Daley Blind and Ander Herrera will take on the role of defensive midfield while Belgium international Marouane Fellaini will look to use his ariel skills to good effect as both Juan Mata and Ashley Young look to thread the ball through to Rooney or has they have done quite often this season find the back of the net themselves.

Captain Wayne Rooney will spearhead the Red Devils attack, and hopes that all the off-the-ball work he puts in will allow him the opportunity to get the ball in a goal scoring position and prove just how deadly he can be when allowed to play in his favoured position.