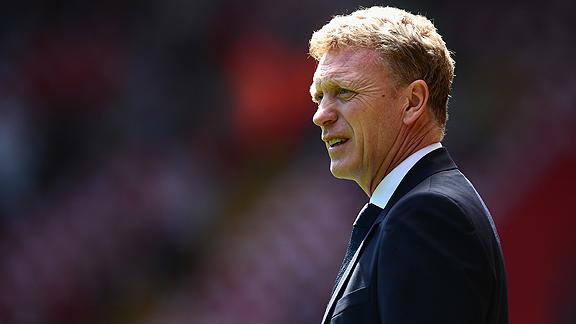 Manchester United manager David Moyes is prepared for a hostile reception when he takes his team to Goodison Park on Sunday to play his former club Everton.

The United boss was continuously barracked by abuse from Everton fans when Everton beat United 1-0 back in December, and it is expected that despite pleas from his successor at Everton Roberto Martinez that he will be subjected to abuse once more.

Some Everton fans are still upset at the way their former manager signed Marouane Fellaini and tried to lure Leighton Baines back in the summer.

Moyes meanwhile is trying to get the fans to focus their attention on the game rather than the fact he abandoned Everton for United after being there for 11 years.

But the United manager, who spent 11 years in charge at Everton, is trying to turn the focus to the teams on the pitch, rather than himself telling Sky Sports:

“You get on with your job,” said Moyes when asked how he felt after being verbally abused by Everton fans.

“This was the first game I looked for when the fixture list came out.

“I was always thinking when would I first be going back to Goodison. I will go back with great memories. I had great times there. It will be a strange day, but I’m looking forward to it.

“I go there as manager of Manchester United and I’m delighted to be that. I was proud to be manager of Everton at that time but my job now is to make sure I get a result for United.

“The Everton fans were always terrific in my time there – very supportive and always right behind the team. We go there with a great away record and go there trying to keep that going.”

Meanwhile Manchester United has struggled this season under Moyes whereas Everton are fighting for a possible Champions League spot with Roberto Martinez at the helm.

He added: “I’m looking forward to going back as I had some great times and worked with great people and, more importantly, some great players.

“They were terrific and I’m really pleased to see them doing well. Roberto has done a brilliant job there in the time he has been in charge.

“He’s got them playing well and in a good, healthy league position so I go back with some great feelings but I’m back now as Manchester United manager and my focus is on that now.”