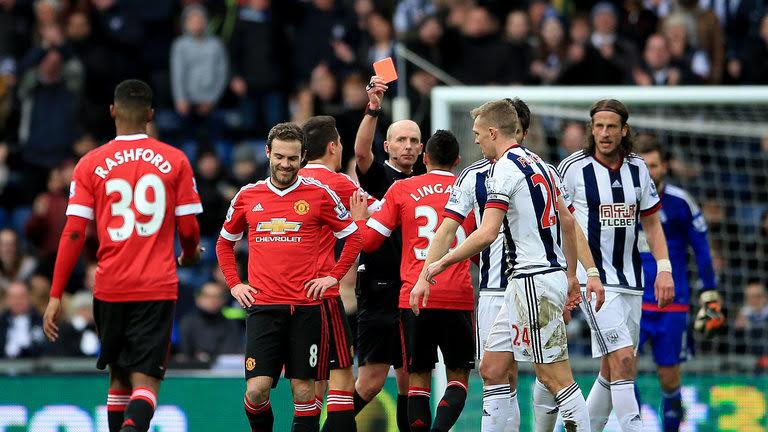 Manchester United manager Louis van Gaal is not a happy camper this morning following yesterday’s 1-0 loss to West Brom at the Hawthorns and has criticised the “stupid yellow card” that contributed to Red Devil midfielder Juan Mata being sent off for the first time in his career.

The Spaniard was booked for jumping in the way of Darren Fletcher’s speedily-taken free kick in the 23rd minute, even though he knew that it would lead to a booking.

Then just three minutes later referee Mike Dean had no option but to book Mata again for a wild attempt at a tackle on his former Old Trafford teammate which meant two yellows and an automatic red.

While being interviewed after the match LVG could not hide how he felt over Mata’s unnecessary first booking, and was furious that having had already one caution the Spaniard did something so rash just minutes later.

‘The first was a stupid yellow card,’ said the United boss. ‘You know it is a yellow card in advance.

‘When you have a yellow card you have to take care of that. The referee can always give another yellow card then and then it is a red card.

‘The second you know you already have one so you have to take that into account. You damage the team.

‘The decision was the turning point in the match. It is very difficult to play 10 against 11 for 60 minutes, that is the reason why we lost this game.

‘We did not give many chances away. West Brom scored out of three chances and for us it is a big disappointment.’

With the loss United lost ground on several teams above them with van Gaal believing that they must now win all of their remaining games to have any chance of automatically qualifying for European football next season.

‘It’s a big blow,’ he admitted. ‘Now you lose and lose contact with the first four or five.

‘These kinds of matches you have to win – we need 27 points.

‘For us, it’s very bad. A bad moment. When you see at the end the chances that West Brom created in comparison with us, it was an unnecessary loss in my opinion.

‘I don’t want to say that we deserved to win, no, but we did not deserve to lose.’