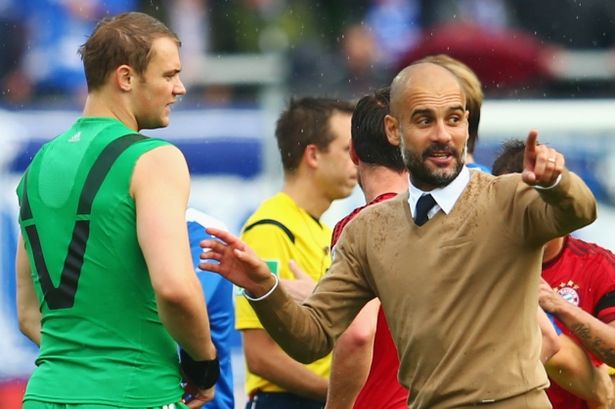 The future of Manchester City and England No.1 goalkeeper Joe Hart is in doubt following the news that incoming manager Pep Guardiola wants his Manchester City team to play with a sweeper-keeper.

Currently Bayern Munich and Germany shot-stopper Manuel Neuer is top of Guardiola’s wish list to join him in Manchester, plunging Joe Harts future at the club into doubt.

With Guardiola having already told the City bosses of his plans, the club is monitoring the German international’s situation at the Allianz Arena with an eye to making the 29-year-old an offer he would find hard to refuse.

Currently Neuer still has three years to run on his current contract with the Bundesliga champions, but is believed to be after a pay-raise that would see him earning a whopping £300,000 per-week, almost double what the Bavarian clubs top earner now gets paid.

Oil backed Manchester City would have no problems meeting the big Germans demands and will hope that their financial firepower will lead to a deal being done.

As things stand right now Joe Hart is not the only one nervously waiting on Guardiola’s arrival, as the whole team knows that big changes are on the cards when the former Barcelona man arrives in Manchester.