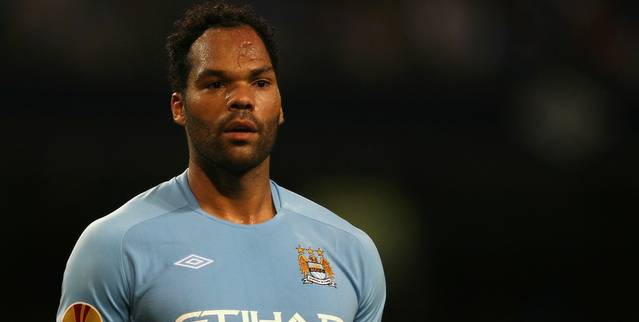 Manchester city defender Joleon Lescott has spoken about how frustrated he is with not being given an opportunity to play in Manuel Pellegrini’s team.
The 31-year-old is in the final year of his contract with the Citizen’s and has as yet to be offered new terms. He got to play in City’s recent 4-2 win over Viktoria Plzen, but only due to the fact Vincent Kompany and Matija Nastasic were out injured.
With not playing on a regular basis for City, England manager Roy Hodgeson dropped him from the England squad for next summers World Cup in Brazil Lescott said:” I need to be given a fair opportunity. I know no one can guarantee me playing every week but I would like to think that given a fair opportunity to play, if I am playing in the team I can do well enough to stay in the team.
“If you start to doubt yourself it will affect you so I try not to doubt myself and believe I can perform. When the opportunities come you have to grab them and if it means playing the next few games when Matija is out and Vinny is not ready, then great for me.

Hopefully once again I can prove to the club, and if it is not here somewhere else, that I am worthy of a new contract.”
While Lescott would like to be offered a new contract at City, he would also like to be playing regular football.
“It is hard not playing. No professional enjoys it and I am no different,” the former Everton defender said. “It is not great not playing in the last year of my contract. The situation is not ideal but I just have to try to play well when I am given the opportunity. We all train through the week to play and then when you are not it is disheartening.
“I want to stay, that is the main thing but the club have not approached me yet, so I don’t know what the situation is with them. If I am playing for my future here, then great. If I am playing for it elsewhere, then so be it. I just know that every time I am out there I have to perform at a level were top clubs would be interested in signing me.
“It depends what the club wants and what opportunities there are for me. I am not just going to leave a club like this for the sake of it, but at the end of the season I would have to. So nothing can happen now. I can’t speak to any clubs and no clubs can approach me but when that opportunity comes, if it does come in January, I will have to look at that.
“I have not really focused on anything but if a team abroad was giving me a fair opportunity to play and progress, then I would look at it. If you are not playing for Man City, it does not make you a bad player.”
Perhaps Lescott can see how leaving City has rekindled the spirit of Kolo Toure at Liverpool. Lescott is a good defender that is bound to attract attention in January.