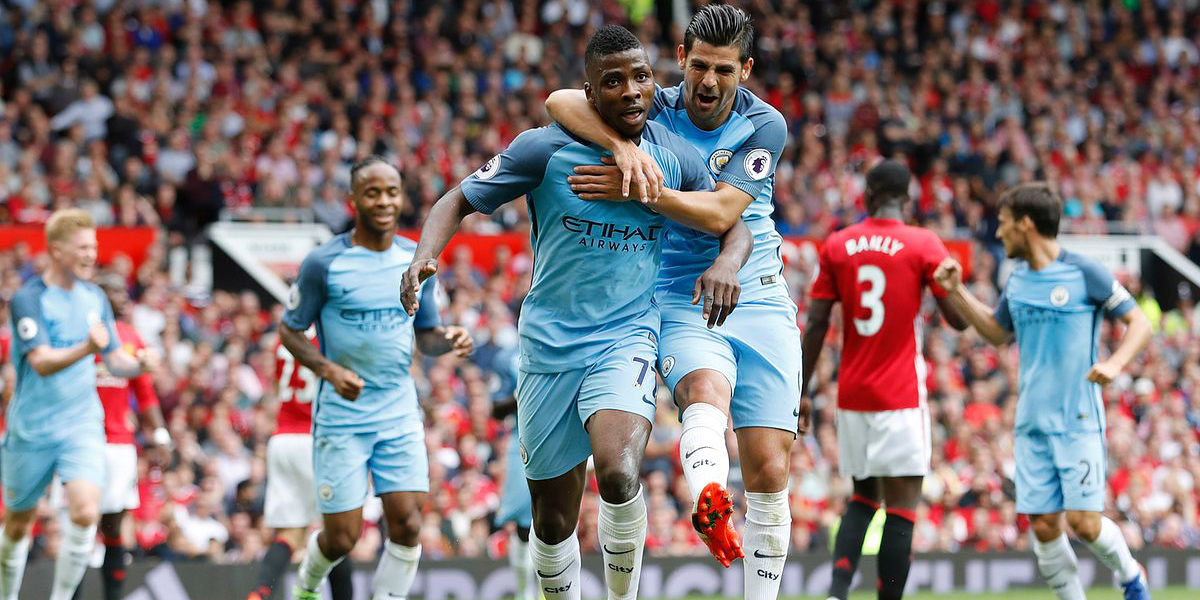 Manchester City won the Manchester derby on Old Trafford 1-2 after playing a fantastic first half. In the second half, United were the better team but failed to score an equalizer because Zlatan Ibrahimović failed to convert the chances. All in all, a tactical victory for Pep Guardiola and points for the better side. Let’s see how did the players do:

The goal is not his fault – though he should have shouted something to Stones if he spoke English – but generally he looked impressed. Still, it’s Pep’s mistake to field him so soon and forget the reliable Caballero. And to ditch Hart, by the way. It’s all Pep.

Not bad, did what he had to do.

The goal is his fault, he should have more situational awareness and shouldn’t collide with his own goalkeeper. This is not a good defender, and the only reason he’s getting a 6 and not a 5 are a couple of key interventions late in the game.

Otamendi’s combatitive counterpart on the flank. Did loads of hard work in defence, biting to the bone.

Not too bad but is lagging behind his more creative team mates while not being such a good holding midfielder.

Same as Fernandinho. Fernando was brought on to halt the United advance and, as it turns out, the advance was indeed halted as the score remained 1-2.

Gave rhythm to his team, and is quickly becoming what Luka Modrić is in Real Madrid. That’s where Pep got the idea probably.

By far the best player on the pitch. Didn’t give United defence time to think or even react. Phenomenal player.

Was a constant menace, and a good sidekick in De Bruyne’s game. Lost pace in the second half though.

The kid is wicked good. He didn’t get any returns in form of assists or goals, but he is an unpredictable dribbler who opens up space quickly and creates a dangerous chance.

The kid did good and scored a goal when the ball landed at his feet (pictured above).

Did what he could. Made four or five quality saves and didn’t manage to do anything against De Bruyne.

Blind is not even a defensively solid fullback, let alone a centre-back. And he showed that by making two mistakes which lead to two goals.

He didn’t look too confident in defence but generally did well. It’s Manchester City he was playing against. Not a bad defender.

Didn’t do much. It seems he doesn’t have the power to turn things around, and on the other hand he didn’t do much weong either. Didn’t help Blind who was playing next to him, and that’s what’s really wrong with Shaw’s performance.

In the first half he did more or less ok, but in the second half he disappeared. Most notably, Kevin De Bruyne was doing whatever he wants in offensive midfield and Pogba was nowhere to be seen.

He is what everyone hoped Pogba would be. A true complete midfielder who helped his team immensely. Without his contribution, United would have been on the back foot throughout the game.

Replaced Mkhitaryan and did better than him, but didn’t produce anything worthwhile.

Did his thing. Gave the team character and offensive presence. He is the kind of player who doesn’t necessarily generate tangible returns, but he did do a lot for United in this game and was the factor of stability while so many others underperformed. Kept United in the game.

Another player less for United.

He played a beautiful game and should have earned himself at least one assist or a goal. This kind of performance is what you expect from a winger.

Got only 12 minutes of playing time.

Scored, but could have scored three more and he didn’t. United produced enough chances for the big Swede to earn a 2-2 draw but the forward failed to convert. While his goal was world class, his wasteful shooting from promising chances was anything but.

City looked fantastic in the first half, and later they didn’t do so well but Pep made the right move by removing Iheanacho and starting to play with a false nine. City were totally inferior in the second half but Pep generally did very well and gave a tactical lesson to Mourinho and to all the nay-sayers. And he had to do all that without his key player Kun Aguero, on the road, on Old Trafford.

Didn’t give United a chance to do well in this match. Too many mistakes. Fielding Blind as a centre-back cost him two goals, fielding Lingard and Mkhitaryan cost him the entire first half. Where was Mata? This was one of the worse performances of Mourinho’s career.