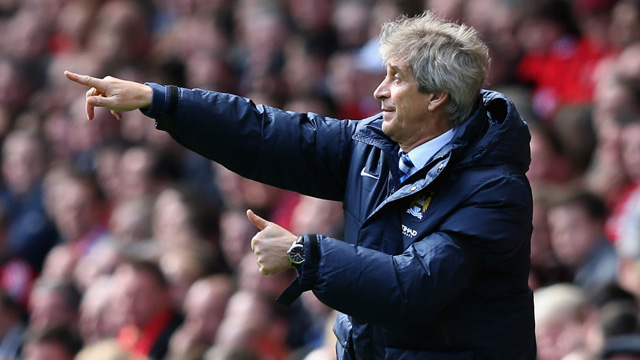 Manchester City manager Manuel Pellegrini has said following City’s shock 2-2 draw at home to lowly Sunderland that the Premiership title race is now out of his hands.

Pellegrini confessed that his team were suffering after having lost to Liverpool 3-2 at Anfield on Sunday and that title rivals Liverpool and Chelsea now have the upper hand.

City is now six points behind leaders Liverpool with a game in hand which could still prove vital if Liverpool or Chelsea were to slip up in their remaining games.

“Obviously Liverpool and Chelsea have more of a chance to win [the league] than us now,” said the Blues boss when talking to talkSPORT.

“But anything can happen from now until the end of the season. We will just try to do our best, we’ve got five more games to win and we can add 15 more points.

“I think City were in a similar position two years ago and they ended up winning it, so you never know. It’s all just speculation at the moment.”

City looked drained last night against Sunderland and when asked about it the Chilean manager said: “I think today we struggled mentally from the very beginning.

“We didn’t deserve to win, we didn’t play well. It’s like we couldn’t get the game against Liverpool out of our heads.

“To play against these teams that are in the relegation positions is very difficult because they play every game like it’s their last. We needed 100 per cent intensity and we couldn’t do that today.”