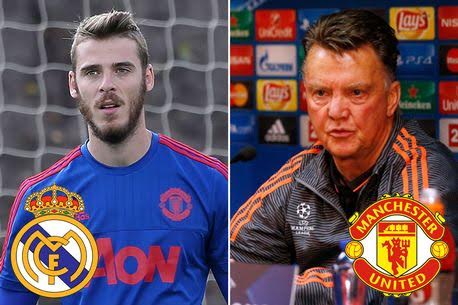 Initially Manchester United manager Louis van Gaal said that he would reinstate goalkeeper David De Gea back to the Red Devils first team if the Spaniard was still at Old Trafford come next Tuesdays transfer deadline.

De Gea is however not so sure that it will happen and that it will ruin his chances of being Spain’s No.1 at next summer’s European Championships.

The 24-year-old is right to be concerned if van Gaal’s past record is anything to go by, with the 64-year-old manager leaving a trail of goalkeeping casualties all over Europe.

According to the Daily Mirror, De Gea’s desire to leave Old Trafford is not just fuelled by his desire to join Real Madrid, but also by his troubled relationship with Van Gaal and coach Frans Hoek.

Unless Manchester United lowers their unrealistic asking price of £35 million, De Gea could find himself as a bench warmer until he will be allowed to join Real Madrid as a free agent next summer, while also probably missing out on playing at Euro 2016 in France.