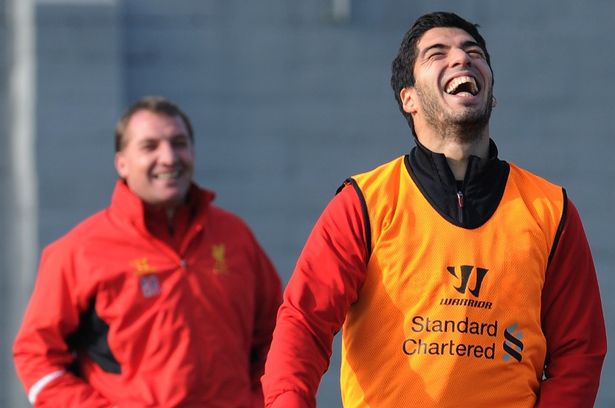 According the Liverpool manager Brendan Rodgers Liverpool striker Luis Suarez has been “working his socks off”, and will be ready to face Manchester United in their League Cup match next week.

The Liverpool striker has been out serving a ten-match ban after biting Chelsea’s  Branislav Ivanovic in a match last season.

“We have been organising some games behind closed doors, both in terms of in-house 11-a-side matches and bringing teams in,” Rodgers told the Liverpool Echo.

“In between that he has had international games as well to keep him ticking over. He has been doing a lot of individual work, specific to him on top of all that and replicating his high intensity speed runs that he would do in a game.

“It is not the same as playing in a match but say he did 100 high intensity runs in a game, he has been replicating that in training so that he is at a level where we hope he will hit the ground running.

“There are always other things in a game – the crowd and the anxiety you cannot replicate that in training – but what you can at least do is get him to a level of fitness so that his numbers are replicated and that keeps him at a high level.

“The idea is that hopefully when he steps back in it will be seamless. Of course there will be a transitional period for him but I am really looking forward to having him back.

“He is working his socks off. At the end of sessions, he is having extra work tagged on relative to him and his position. He is flushing himself out to the maximum to be as fit as he possibly can.”