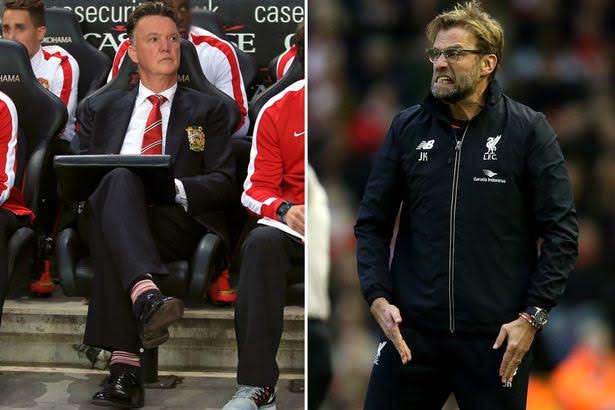 Following Liverpool and Manchester United’s two Europe League, it was obvious to see, that while Liverpool have only had Jürgen Klopp in charge for six months, the German has managed to get the team to play his type of fast “Gegenpressing” style game, while Louis van Gaal has struggled following a backlash from the fans after what many called a very un-United style of possession based play.

The two styles of management could not be much different either, with Klopp turning up for his press conference in a Beatles t-shirt ahead of the Reds game today with Southampton, and rather than berate the assembled journalists the former Dortmund boss always manages to have a laugh, something that cannot be said of van Gaal.

Following the final whistle in last Thursdays 1-1 draw at Old Trafford, Klopp went over to salute the traveling fans while Dutchman, Louis van Gaal headed straight down the tunnel perhaps wondering if this afternoons local derby with Manchester City could be his last game in charge should the Red Devils lose.

Taking a close look at Liverpool and Manchester United, you have to feel that the Merseyside club has a manager who is there for the long haul, a manager who wears his heart on his sleeve, not afraid to show his emotions as he prowls the technical area, almost a polar opposite to van Gaal sitting in his dugout with a clipboard.

There is also for all to see, a bond between Klopp and his players that has never existed under LVG, and was perhaps missing at Anfield under Brendan Rodgers as well.

Since arriving in the summer for £29 million, Hoffenheim midfielder Roberto Firmino failed to display his talent under Rodgers, but seems to have found his way ever since Klopp arrived at the club, saying of Klopp: “He is the best manager I have ever worked with. I don’t say that because he picks me all of the time. It’s because of his mentality and personality. He gives confidence to all of the players. He knows what your potential is, so he always says just one or two words to give you confidence and show trust.”

United in contrast seem to wander week to week with no player, other than perhaps a handful even knowing what the future holds for them at Old Trafford, and with the possibility of Jose Mourinho arriving in the summer it must have Juan Mata already looking for his next team.

As things stand right now going into this afternoons matches, Liverpool’s season, despite losing in the Capital One Cup to Manchester City still can be looked at as a success under Klopp.

The Reds are into the last-eight of the Europa League and still have an outside chance of a top-four finish, which is not bad if you consider Klopp has had to work with the players he inherited from Rodgers, unlike LVG who has during his time at Manchester United has managed to spend £250 million and sell players on who have become stars at their new clubs.

As for United and LVG nothing less than a top-four finish would be acceptable for the clubs directors and owners, and even though we do truly feel van Gaal will leave in the summer, we are sure the Dutchman would prefer to leave on his terms rather than the boards.

A win today against City would keep van Gaal in his job for now, as would beating West Ham in the FA Cup, but as for the future we think the die has been cast and everyone at Old Trafford cannot wait for the season to end fast enough so that they can get rid of the ill-fated van Gaal, while buying in to what Mourinho has in store.