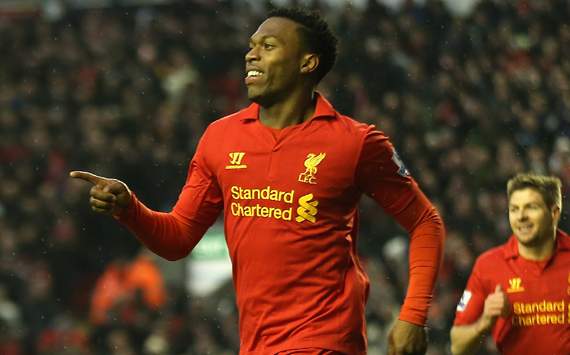 The Reds are concerned over the fitness of striker Daniel Sturridge ahead of the big match with Everton tomorrow lunchtime.

Sturridge who has enjoyed a fantastic start to the season picked up a leg injury while on international duty and is now doubtful for the local derby with Everton on Saturday.

Liverpool manager Brendan Rodgers admitted that Sturridge has had the problem for weeks, and that it is only getting worse.

‘He went to England with an injury,’ Rodgers said.

‘He’s had a dead leg for three to four weeks, and he’s been playing through with it. He hardly trained when he left after the Fulham game.

‘We’ll assess him and hope he’ll be ready to play.

Rodgers went on to say that if Sturridge tells him he is fit to play he will listen to him rather than the doctors.

‘Sometimes managers are led by their players,’ he continued.

‘You can only ask the player how they feel. If they say they’re happy and that they want to play – that’s something you have to consider.’

Liverpool has several injury doubts going into the Everton match with Spanish full-back Jose Enrique joining the list of injured players earlier in the week.