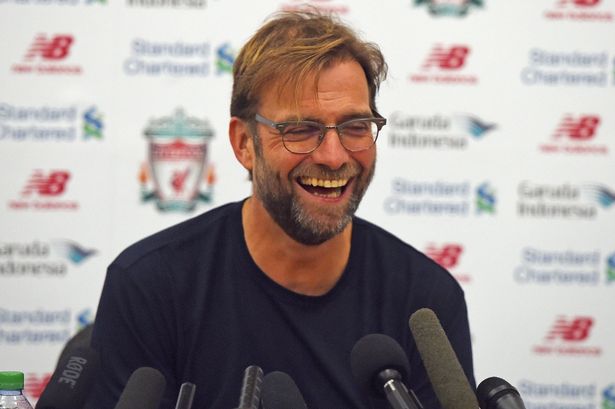 The first question asked at this morning’s press conference at Melwood ahead of tomorrow’s clash with Norwich City concerned the fitness of Daniel Sturridge.

No surprise when it comes to team news except perhaps regarding Adam Lallana.

“Adam Lallana is a doubt. He has a little issue. We will have to see.”

On Sturridge: “I am happy about other things. I can’t rush situation. Last four days were really good. Still needs time. Nothing new.

When asked about any developments regarding Alex Teixeira to Anfield or any other possible Liverpool targets Klopp said:

“No. Nothing to say about this. I could say a lot about a lot of players.”

He then jokes with reporter: “Be careful with your questions.”

“If you are under pressure people want prices which you think are crazy.

“It’s not perfect time to buy but we have to watch the market. If we find a solution and a player who can help us then we’ll try.

“I think I always said if our situation changed then we would have to change.

“If there’s a good player who can help us then we think about it.”

When speaking about Norwich:

“You look at table and think 18 points, it’s not so good, but they are creative and quick.

“They had some problems in defence, less problems in offence, but they have changed this with Klose from Wolfsburg.”

“Everyone could see against Exeter he was involved in two of the three goals.

“He’s working hard and his attitude was really good.

“Sometimes he tried too hard but he knows where goal is. It’s something we need to develop together. He knows what we want to do.”