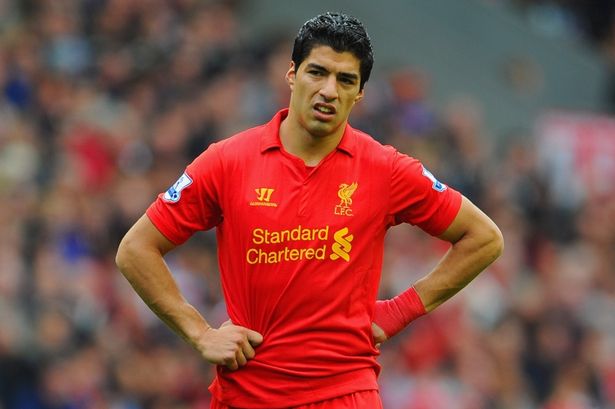 While speaking to Uruguayan radio Liverpool striker Luis Suarez had dismissed talk of him being wanted by Real Madrid saying he is looking forward to a good season with Liverpool.

Since returning to action following the 10-match ban for biting Chelsea’s Branislav Ivanovic the Uruguayan forward has proved that he is one of the best strikers in the world scoring six goals in five matches for the Reds.

This return to form has led to plenty of speculation that he is wanted by Real Madrid as they plan to offload their current frontman Karim Benzema to either  Arsenal or Chelsea in January while looking to bring in Suarez.

Suarez now towing the club line says that he is unaware of interest in him from the Spanish giants and is saying he is quite happy at Liverpool.

“Absolutely nothing at all,” Suarez told Uruguayan radio station Sport 890 when asked if he knew of any interest from Real.

“The Premier League is the best league there is. The stadiums, the atmosphere and the fans make football here so entertaining.”

Earlier in the week Liverpool manager Brendan Rodgers reiterated his desire to keep Suarez when asked if he thought Suarez would be leaving saying: “No, I wouldn’t say that,” insisted Rodgers. “I think he, like ourselves, wants to be at the very highest level he can be.

“And you can see by his performances he deserves to be looking at that level.

“But it also shows he has been excellent in his attitude, you see his work rate – that is the key.”

Rodgers added: “For me, this is the place for Luis. I still maintain that even if we were in mid-table this would be the place for him to be because this is a massive club – a global institution.

“But as a football club and as a team we are growing – and he can grow with us. Luis has the support of everyone at the club and the love of everyone and because this is a worldwide institution, there is no better place for him to grow.”