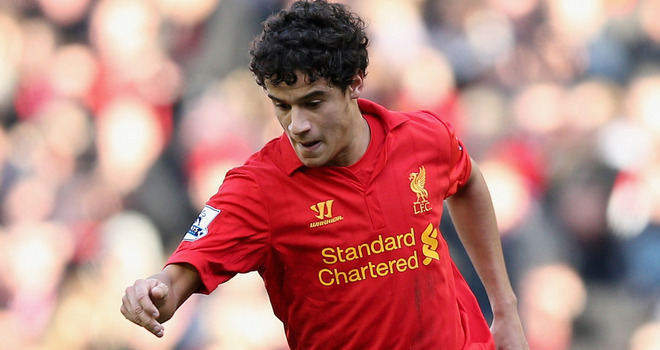 Liverpool playmaker Philippe Coutinho has his eyes set on a place in next summer’s Brazil World Cup squad, and hopes that a stellar performance in Saturdays Liverpool derby against Everton could be the catalyst need in order for  him to get into Brazil national team coach Luiz Felipe Scolari’s squad.

“I will go to Rio to support Brazil even if I’m not in the squad,” says Coutinho.

“The English season will be over, I’m a Brazilian who loves my country, so of course I will be following and supporting the side as much as any fan.

“I still think there is plenty of time for me to try and be part of the team. It’s always going to be difficult because there are a lot of players who play in my position who have been given their chance and are playing very well, but there is a lot of football to be played before the World Cup, so you just have to try to impress for your club until then. My main focus has to be on Liverpool and then see if anything develops.

“I have no idea if anyone is watching me from the Brazil national team but the best way to have a chance is to do well for Liverpool.”

The young Brazilian’s cause was also not helped  by the fact he was out for a long period of time following a shoulder injury, but came back in fine form for the Reds 4-0 over Fulham before the international break.

“I would not agree the team was not playing so well when I was not there,” Coutinho protests.

“When I was not playing, the team still won and was playing very well. What I would say is this; the manager gives me complete freedom to play to link the play between midfield and the striker. He does not limit me to a particular area of field or a position, his instruction to me is to move around and work in different positions that are best for the team.

“My focus in the training sessions is always about movement to create openings and opportunities. When you don’t have the ball, you still need the discipline, to know where you should be, who you should be marking, but when we have the ball it is important to be able to move around. That only comes with practice and I’m pleased people like my style of football.”