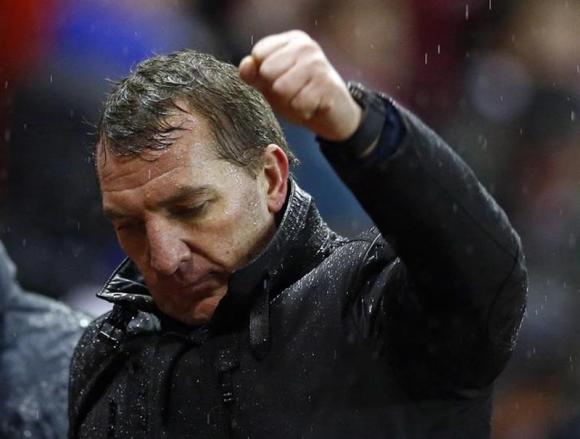 Liverpool boss Brendan Rodgers has assured the press that there are no nerves showing in the Liverpool camp ahead of Sunday’s big match with Manchester City.

Currently Liverpool tops the Premiership four points in front of City who still have two games in hand making Sundays match at Anfield a possible deciding factor as to who will win the League title.

When speaking to Sky Sports Rodgers said rather than being nervous his team if looking forward to the match.

“It’s a significant game, there is no doubt about that,” he said.

“It’s two teams who have done extremely well this season in their own different ways and it should be a fantastic game of football.

“We are really looking forward to it. The team is confident and it should be fantastic.

“We are enjoying it and the players are very focused. We are calm and the training this week has been outstanding, so there have certainly been no nerves.

“There is talk about pressure and different types of words to describe it but, for us, it is exciting. We are really enjoying where we are.

“It is not by accident. Over the last 20 months we have been building to arrive at what we have and we are looking to try and sustain that over a longer period.”

However, while acknowledging the fixture’s significance, Rodgers does not think the winners will have all-but clinched the Premier League.

“There is still a lot of work to do after this game,” he said. “The finish line is still a way to go.

“For us, our focus is on the three points as, at the end of the day, that is all that comes out of the game.

“You will gain confidence, gain belief, but the three points is all we are after.

“There are five games to go and, even after this one, there are still 12 points to play for.”

Rodgers stressed that his side must keep their composure during what is likely to be a raucous occasion.

“It is vitally important,” he said. “And I think we showed that last weekend during the game against West Ham.

“We knew that was going to be a tough game for us and we went 1-0 up, then had the disappointment of the goal that was given against us.

“But, in the second half, we showed great composure and control in our game, had good dominance and went on to win.”

This weekend will also commemorate the Hillsbourgh disaster in which 96 Liverpool fans lost their lives 25 years ago in Sheffield.

Rodgers said: “It gives us great commitment and motivation of course.

“Obviously, we’ll get a chance to commemorate Hillsborough next week. It’s going to be a great atmosphere at the weekend and, of course, the significance of Hillsborough for the world is to be marked.

“For us, we carry it every day of our lives here, as a manager, as players, as the supporters.

“Ninety-six people died and the victims of that and the families are with us every day of our lives.”