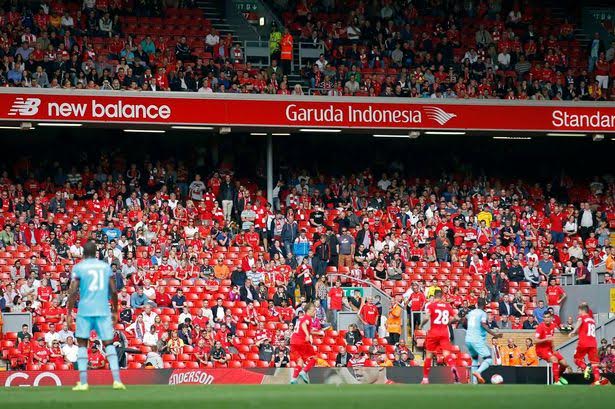 The headline is not our words, but those of former Liverpool player Mark Lawrenson, who we feel made a lot of sense in his column in the Echo this weekend, so we thought we would share it with you here, and see if you think the former Liverpool defender has hit the nail on the head.

There were plenty of empty seats towards the closing stages of defeat to West Ham last week, and I’ve never seen so many people leave Anfield so early as against West Ham United last weekend.

That performance really emptied the place.

It may be more than a week since that desperate defeat, but the international break has meant the result has been allowed to fester.

And fester some more.

Harry Redknapp stuck his oar in by saying this is the worst Liverpool team in years, but that’s Harry for you – he’ll probably change his mind in a few weeks.

But his comment that he is “not with Liverpool at all this year” has struck a chord.

Not least because it appears some of the supporters feel the same way.

Our supporters are among the most loyal and informed in England. They have seen great teams, great players and great managers.

And I feel at the moment they are looking at our team and are somewhat apathetic.

It isn’t just about losing to West Ham. We could win our next five games and I’m sure the fans will feel the same.

It wasn’t as though the fans wanted to stay there or boo and jeer.

They just clearly thought they’d had enough. They just wanted to go home.

There’s apprehension among that apathy.

We are a poor man’s Arsenal at the moment, in that you know this Arsenal will always let you down eventually.

You know deep down they won’t win the league because, somewhere along the line, they will disappoint and disappoint greatly. This Liverpool are the same.

The West Ham defeat underlined a problem that already concerns me: a worrying lack of width.

Other than Jordon Ibe, we have no real wide players.

Adam Lallana wants to come inside all the time and Roberto Firmino is a bit like that, as is Philippe Coutinho.

There’s nothing wrong with that as long as you have balance, and we don’t have that.

Teams can just squeeze us so we play right down the middle. And if you get the likes of Coutinho to start playing with their heads down, they aren’t anywhere near as effective.

Joe Gomez is not an attacking left-back while Nathaniel Clyne has been steady but hardly in the mould of, says, Seamus Coleman going forward, who makes something happen all the time.

Early days, I know. But teams have sussed us out already. Pack the central areas, stick the foot in and you’re likely to give Liverpool a hard time.

There’s been a lot of talk of the stuff in the wake of last weekend, continuing a theme that developed throughout last season.

Character is standing up and being counted when things are going against you on the pitch and it would be quite easy to hide and keep well away from the ball.

Character is about having the cojones to keep plugging away when you’re having a bad day.

If players each show that individually, and you have that collective, then you can eke a result when not playing particularly well.

Once you get one or two players who are having second thoughts during the match – and maybe I’m generous by saying two – then you are going to be in trouble.

I’m aware Dejan Lovren came out after the West Ham game and said he wanted to hide after his mistake for the second goal, but that was more an off-the-cuff remark than anything else.

He was being honest. And I genuinely don’t think Lovren’s character is an issue.

His problem is confidence, in that he can lose it far too quickly.

Lovren is the type of player who can perform well for 30 minutes then make a single mistake and his head is gone. That’s not a lack of character – if he had no character, then he really would hide.

But he continually puts himself on the line despite all the flak he’s receiving.

It also looks like Philippe Coutinho will have to show character this season. He’s a marked man, and he’s going to become frustrated as he clearly was against West Ham.

He needs to rise above that and keep making himself an option for his team-mates.

How would I rate Liverpool’s business in the transfer market?

It’s been good. Not great, but good.

Obviously, we can’t really make a considered opinion until the end of the season. Just look what happened to last summer’s intake.

But getting rid of Fabio Borini and Mario Balotelli has been key, while Brendan Rodgers has clearly decided Lazar Markovic isn’t going to train up and has let him go out on loan.

I’d be surprised if he plays again for Liverpool. I quite like Rodgers has accepted he isn’t going to improve the player.

However, as I have hinted elsewhere, we should have brought in a wide player, especially with Markovic being allowed on a season-long loan.

We are making it harder for ourselves by not having enough width in our team.

We haven’t created many chances apart from in the first half against Arsenal, and even that was against a makeshift centre-back pairing.

After Arsene Wenger reshuffled things at half-time, we created little in the second half.

Jordon Ibe hasn’t been at it so far this season, but that’s understandable given he’s still young and a lot of expectation has been placed on his shoulders.

But, as has been suggested, we end up playing Alberto Moreno at left midfield because he is good going forward, then what a statement that is.

I’m sorry. But this is Liverpool we are talking about, a team trying to get into the top four.

We’re not a Stoke or Newcastle. We have a big squad. We should be better than this.