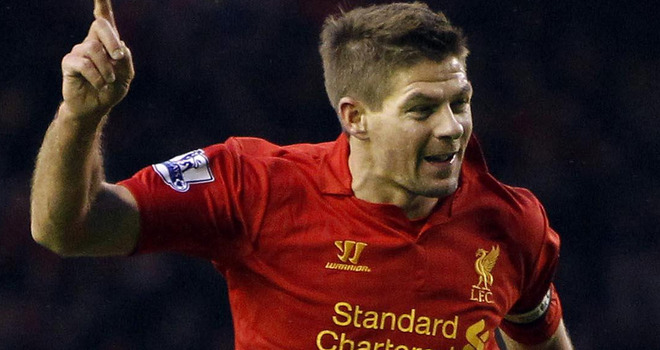 According to Liverpool manager Brendan Rodgers it is quite possible that Liverpool captain Steven Gerrard could revert to being a centre-back.

Currently the 33-year-old Liverpool player plays in a midfield position, and is famous for his accurate passing and telling runs though the middle, but that could all change according to the Liverpool boss.

“I look at Steven and I think he can play as a number two centre-half later in his career,” the Reds boss said.

“You play against teams where they’ve got one up [front] and I think he can play as a right-sided centre-half.”

Gerrard signed a new two-year contract with the club he supported as a boy during the summer, which will mean him remaining at Anfield until after his 35th birthday.

Rogers is comparing Gerrard to Manchester United Ryan Giggs who has by altering his way of play is still competing despite being 40-years-old.

“[He could] build the game from behind,” said Rodgers. “How he passes the ball is as good as anyone in the world, short and long.

“So it’s a possibility that he could go on, but it will all be determined by fitness.

“He is 34 at the end of this season, and I look at his fitness and I look at how he is playing and he is as fit as he has ever been. He is looking after himself.

“That player he was 10 years ago, dynamic and making those long bursting runs, of course that goes out of your game.

“Like you see with Ryan Giggs, you adapt and change.”