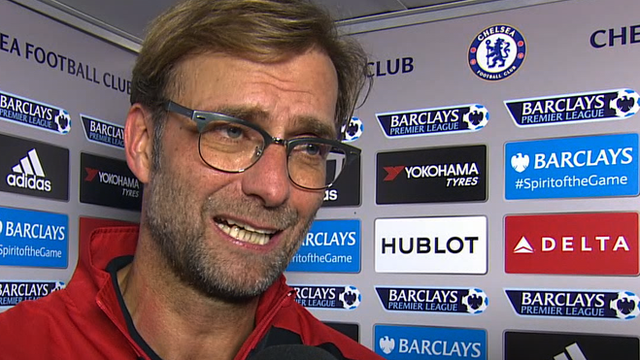 Being Liverpool fans ourselves, we have to say we were waving our arms in delight following Philippe Coutinho’s equalizer and the subsequent goals in the 3-1 win at Stamford Bridge yesterday, and yes we too are now becoming believers in Jürgen Klopp, and will tell you why.

Despite having Christian Benteke available the former Dortmund boss decided to play midweek man-of-the-match Roberto Firmino up front with his countryman Philippe Coutinho and former Southampton captain Adam Lallana a move Brendan Rodgers would never have made.

We never understood why Rodgers bought Mario Balotelli when he did and then went and repeated the move by paying £32.5 million for Christian Benteke after the Italian failed to impress.

Not to take anything away from the Belgium as he is by far a better player than Balotelli, but he is not the Luis Suarez replacement that the club needed to buy, and never will be, which we think Klopp realizes.

OK before you go and say Firmino is not either, we agree he is more of an attacking midfielder than an all-out striker, but given his goal scoring prowess while in the Bundesliga with Hoffenheim there is no reason not to play him as a striker when you have Coutinho available as well.

Had Daniel Sturridge or Danny Ings been available it might have been Coutinho starting on the bench with Benteke, but it was not and it all worked out including the introduction of Benteke when Chelsea were already on the ropes.

On paper at least Liverpool appears to have a good squad, apart from perhaps a quality defensive midfielder, but given the players in his squad we think Klopp will find their natural positions and be able to get the most out of them unlike the indecisive Rodgers.

Before we all get carried away after just one game we should take note of what Klopp had to say following the win and get our feet back planed on the ground. “Oh please. Are you crazy?” he said, when asked by a journalist if Liverpool can fight for the title.

“I’ve been here three weeks, round about. You think after one win at Chelsea we should think about this?

“We don’t think about this. We have to think about the next game, about improving our game and our style. We can do much better than today.”

Those last few words were exactly what we and other fans needed to here as we look to what we hope will be a new era of success on Merseyside.