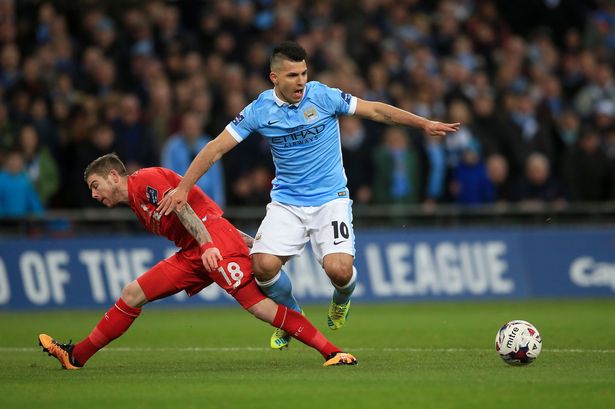 Following the bitter disappointment of Liverpool’s Capital One Cup loss at the hands of Manchester City yesterday at Wembley we have to in all honesty say that the game never would have gone to penalties had referee spotted Alberto Moreno’s penalty giving foul on Sergio Aguero, never mind the two opportunities former Liverpool winger Raheem Sterling wasted.

So now moving on Klopp has some tough decisions to make starting with dropping Spaniard Alberto Moreno in favour of the fit again Jon Flanagan. Time after time Moreno mistakes have let down the team as was the case during his handling Manchester City’s goal.

And it is not only Moreno who needs to be shipped out in the summer, but Liverpool goalkeeper Simon Mignolet as well. For some reason Liverpool saw fit to give the Belgium an new five year contract, yet for us he is nowhere near the quality keeper Arsenal, Tottenham, Chelsea and Manchester United have at their disposal and needs to be let go this summer in favour of perhaps Jack Butland or better still Barcelona’s Marc-André ter Stegen.

Former Liverpool defender and now Sky Sports football pundit Jamie Carragher agrees with our assessment saying after the match: “Klopp will realise there is a lot of work to do in terms of turning it around.”

“To take City to penalties he should be proud of the players. They never left anything out on the pitch. In extra time they looked the team who were going to win.

“Are Liverpool good enough to win the Europa League? Probably not. There are a lot of good teams left.

“Now the game against Manchester United in the Europa League, that’s the big game. The season is resting on it.

“It’s almost like a cup final now. There’s no doubt it’s been a disappointing season and there is lots for Klopp to do.”

Liverpool’s only hope of Champions League football rests with a Europa League win, yet given yesterday’s performance we still feel it may be a bridge too far.