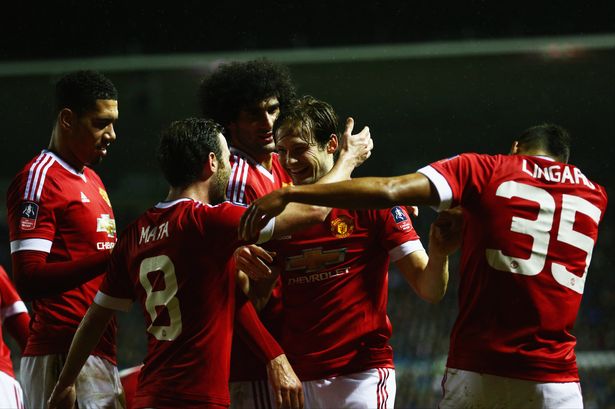 As the pressure mounts on Louis van Gaal to try and salvage his job at Old Trafford the stars could not be aligning worse for the Dutchman as injury after injury takes its toll on his now depleted squad.

The latest setback is goalkeeper David De Gea, and with Samuel Johnson also injured and Victor Valdes away on loan and Joel Pereira cup tied it will be up to 18-year-old Dean Henderson to come in as back-up for Sergio Romero.

The teenager is also likely to be joined by other rookies on the Red Devils bench with Regan Poole, Joe Riley and James Weir all expected to be added to the squad for tonight’s match against Shrewsbury Town in the Fifth round of the FA Cup.

One tiny bit of good news however is that Cameron Borthwick-Jackson could return for the clash at New Meadow.

With De Gea injured it will be up to 29-year-old Argentinean shot-stopper Sergio Romero to try and save the Red devils from what would be their worst defeat of the season should they lose to the League One outfit.

Right-back Donald Love did well on loan earlier in the season with Wigan Athletic; while Joe Riley spent most of his time playing for the U-21’s at left-back despite being a right-footed player leaving LVG with the choice of deciding between the two who will start.In the centre of defence it will be Smalling and Blind, while the returning Cameron Borthwick-Jackson starts wide left.

Midfield is an area United must control if they are to come away with a win, which is why we are opting for a Schneiderlin, Carrick partnership to push forward from the back.In front of them we will drop Herrera following his dismal display in Denmark and bring in Andreas Pereira hoping the 20-year-old can reproduce some of the magic he showed in pre-season.

United needs to start scoring goals again and based just on that we will leave Memphis Depay in the starting team hoping that the Dutch youngster can build on the goal he scored last time out. Partnering him on the right side of the pitch will be Jesse Lingard while Anthony Martial will spearhead the attack in the place of the injured Wayne Rooney.

You would normally expect United to win this match easily, but as we have seen of late as the pressure mounts on LVG to produce a win it does not seem to matter who United plays with the team seeming to have lost their way.