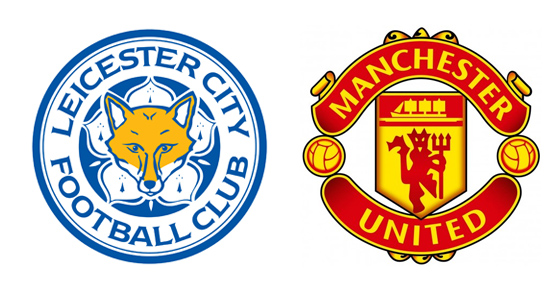 Goal weary Manchester United fans are getting ready for this afternoons top of the table clash with Leicester City at the King Power Stadium knowing that a win will see the Red Devils move to the top of the Premiership.

The key battle this afternoon will come between United defender Chris Smalling and Leicester City striker Jamie Vardy, with the Foxes front-man looking to better the Premiership record of 10 goals in 10 games he shares with United legend Ruud van Nistelrooy.

You could hear the moans around Old Trafford get louder and louder every time a United midfielder passed the ball back during Wednesday night’s Champions League 0-0 draw with PSV Eindhoven, and with Wayne Rooney and Anthony Martial the only recognised strikers available to Louis van Gaal, we may well be looking at another boring Red Devils performance unless Leicester scores first.

As for LVG, the club being around the top of the table justifies his tactics and no matter how many times the Old Trafford faithful chant attack, attack, it is falling on deaf ears as far as the Dutchman is concerned.

Following on from Wednesday night’s goalless draw against PSV Eindhoven, Manchester United will be without defender Marcos Rojo and forward Jesse Lingard.

Lingard is believed to have suffered a hamstring strain, while Argentinian Rojo joins the list of injured defenders that includes Phil Jones, Antonio Valencia and Luke Shaw in the clubs physio room.

This news means that Paddy McNair could be given his first start of the season while moving Daley Blind to left-back, or opting to go with a simple back three.

As for holding midfielders, LVG has little choice but to start Morgan Schneiderlin and Bastian Schweinsteiger given the fact that Ander Herrera and Michael Carrick are both still injured.

Team captain Wayne Rooney will be given licence to roam the centre of the park, with Spaniard Juan Mata back in the team after having been fruitlessly dropped for the midweek match against PSV.

Memphis Depay will also remain in the side given the injury to Lingard, while French striker Anthony martial remains the Red Devils main threats up front.

If we were to bet on this match, and given the fact it is an important game for both clubs we would expect Van Gaal to stick with his possession based game, which unfortunately for the fans will include plenty of passes back to De Gea, and if you consider United have drawn four of their last seven fixtures 0-0 we feel this afternoons late kick off has draw written all over it, so will take a 1-1 final score at odds of 11/2 with BET365.