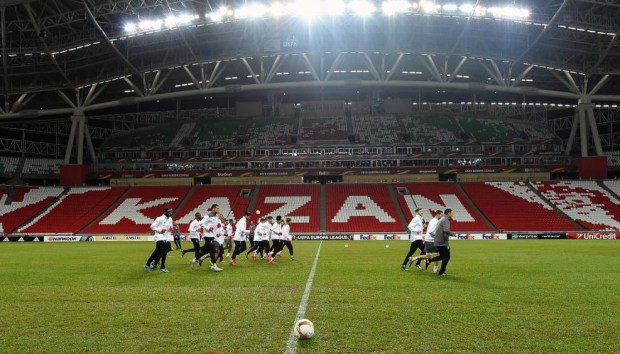 Liverpool have the daunting task of a 6,600 km round-trip journey to play Rubin Kazan in the Europa League tonight, and after having seen the squad Klopp is taking with him to Russia, it would appear as though the big German could be serious about winning the competition, knowing that it may be Liverpool’s best opportunity of playing Champions League football next season.

The Reds are currently in second place four-points adrift of Group B leaders FC Sion one point ahead of Bordeaux and tonight’s opposition Rubin Kazan.

Liverpool’s 3-1 win over Chelsea last weekend was a major boost for the club and its new manager, following on from the Capital One Cup win over Bournemouth and now the former Borussia Dortmund trainer will be looking to secure his first European win with Liverpool after having drawn 1-1 with Rubin Kazan two weeks earlier at Anfield.

Missing for tonight’s match is of course Danny Ings and Joe Gomez while Jordan Rossiter, Jordan Henderson, Kolo Toure and Daniel Sturridge remain side-lined. Disappointedly following his display against Bournemouth Joao Carlos Teixeira is ineligible due to not being included in the Europa League squad by former Reds boss Brendan Rodgers.

Simon Mignolet seems to be the obvious choice despite Adam Bogdan’s impressive display against Bournemouth, so we expect the Belgium to get the nod.

Full-backs Nathaniel Clyne and Alberto Moreno will almost certainly start out wide while Martin Skrtel partners Dejan Lovren so that Mamadou Sakho can be rested for the match against Crystal Palace on Sunday at Anfield.

Here is where we could see some changes in the team with the German selecting both Joe Allen and Lucas Leiva to start as the defensive and holding midfielders while resting Emre Can and James Milner. Out left we expect to see Adam Lallana who is flourishing under Klopp, with 19-year-old Jordan Ibe out on the right-flank.

Philippe Coutinho was brilliant against Chelsea but given how Roberto Firmino is playing Klopp can rest the Brazilian for his international teammate without a worry.

Christian Benteke is now fit, so will start the match with his countryman Divock Origi available to come on as substitute late on for the big Belgium who will be expected to play a huge part against the visiting Eagles on Sunday.