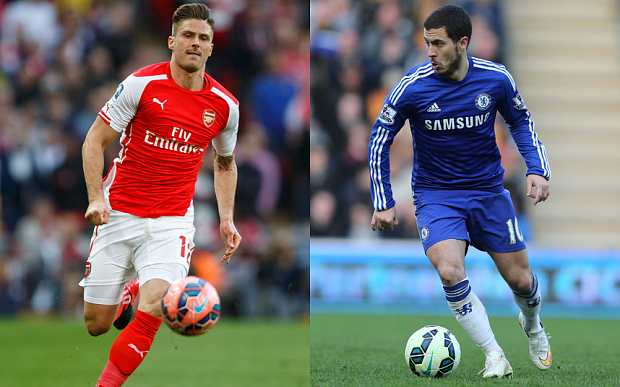 Chelsea travel across town this afternoon to take on rivals Arsenal in what is arguably the biggest match of the afternoon, and if the last meeting between these two Premier League giants is anything to go by we should be in for a treat.

Chelsea are unbeaten in eight games against the Gunners and will go into today’s match with the knowledge that the last time they lost to Arsene Wenger was way back in 2011.

While these statistics may sound good to the Chelsea supporters there is no denying the fact that Chelsea is having one of the worst seasons we can ever remember while Arsenal appear as though they may be true title contenders.

All of this of course will be of no interest to Chelsea interim manager Guus Hiddink whose main job is to get Chelsea back to their winning ways and finish the season as high up the table as is possible.

Considering the Blues are yet to bring in any new players this transfer window, we are assuming that Hiddink will select a similar team to the one he picked to play against Everton in the exciting 3-3 draw last weekend.

As far as injuries are concerned it is the same old story, except this weekend there is a slight chance Belgium international Eden Hazard could participate , all of course depending on the results of a late fitness test.

Thibaut Courtois will of course start in goal with a familiar back-four of Cesar Azpilicueta, John Terry, Branislav Ivanovic and Kurt Zouma all hoping to keep the Gunners attackers at bay.

In midfield we expect to see John Obi Mikel start alongside former Arsenal hero Cesc Fabregas, with the Spaniard tasked with providing the telling passes for Diego Costa.

Ahead of the defensive pairing Oscar will be absolutely vital for the Blues, and should the little Brazilian be able to take control of his area it boded well for a Chelsea win.

Despite his fitness issues we expect to see Eden Hazard play, and with Zinedine Zidane watching on, now would be a good time to start showing just how good he really is if he hopes to ever make the jump to Real Madrid.

Hazard will of course be joined on the opposite flank by the tireless Willian, who in our opinion continues to be Chelsea’s best player game in game out.

Brazilian born Spaniard Diego Costa will again be the Blues main striker and will be looking to build upon all the resentment he built up when the two teams last played while knowing he has the better of both Per Mertesacker and Laurent Koscielny.

On a side note it will be interesting to see if Arsene Wenger decides to play Gabriel given the history between the two players, and if he does all eyes will be on the pair to see if Gabriel tries to settle old scores while Costa does his best to wind the South American up.

Have a look at our line-up below and see if you think we have got it right for this afternoon’s blockbuster.