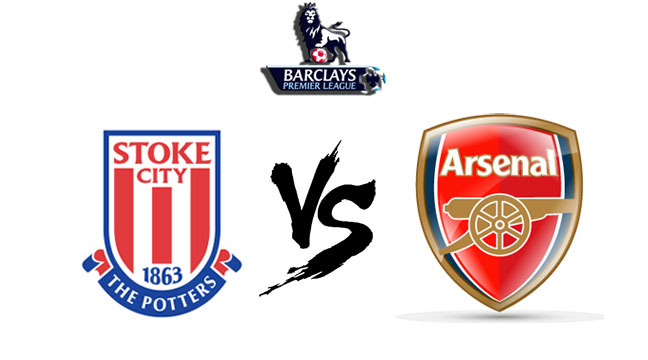 Arsenal travels up to the North Midlands today where they will face Stoke City at the Britannia Stadium, and while the Gunners have struggled there in the past they arrive knowing that Mark Hughes’s team is there for the taking after having already lost four games at home this season.

Since arriving at Stoke Hughes has tried to bring a more stylish way of playing to the club a far cry from when Gunners boss Arsene Wenger called the Stoke team a bunch of rugby players during the time Tony Pulis was in charge.

Arsenal of course are coming off a very tiring game of football against Liverpool midweek, which while being hugely entertaining for the spectators was sure to have taken its toll on the Arsenal players legs.

Arsenal has the momentum however to come away with a win on Sunday, but to do so they must stop steam train momentum of Austrian international forward Marko Arnautović, who may very well be the most underrated player in the Premier League. With seven goals and four assists this season, he has gained the attention of several big clubs including Liverpool.

Arsenal has of course completed their first signing of the January transfer window in Egyptian international Mohamed Elneny, and while the defensive midfielder is eligible to play we don’t think given such a short time at his new club that he will take part in this afternoon’s adventure.

Petr Cech will of course start in goal just as he has done for every Arsenal league game this season, and is in fact the only player to have featured in all the Gunners Premier League games.

In front of Cech will be Wenger’s trusty back four of. Hector Bellerin, Per Mertesacker, Laurent Koscielny and Nacho Monreal, while Aaron Ramsey and Mathieu Flamini continue to fill in for the injured Francis Coquelin and Santi Cazorla.

So long as he is not injured Mesut Ozil will always be wearing the No.10 jersey with Joel Campbell doing more than enough against Liverpool to keep his starting place ahead of Alex Oxlade-Chamberlain.

With Alexis Sanchez being listed as 60/40 to play we expect Wenger to air with caution and start Theo Walcott along with striker Olivier Giroud who quietly goes about his business being in the right place at the right time as he was against Liverpool Wednesday night.