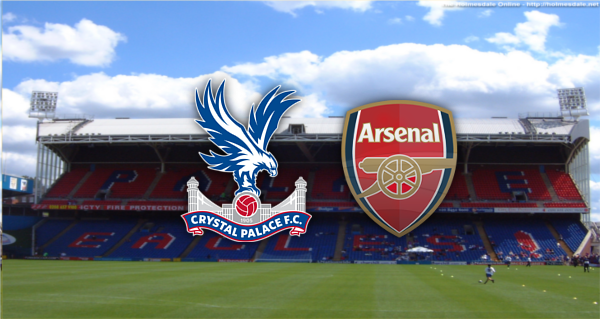 Following the Gunners disappointing 0-2 loss at home to West Ham on the opening day of the season, Arsenal will be looking to bounce back with a resounding win to help justify why so many people predicted that this may be the season they can win the Premiership.

Just like the Hammers however Alan Pardew’s Crystal Palace cannot be taken too lightly especially when you consider they are one of the best counter attacking teams in the Premiership full of pace with players such as Wilfried Zaha and Jason Puncheon ready to test the Gunners defence.

The Eagles opened their campaign with a well-deserved 1-3 win at Carrow Road against newly promoted Norwich, and will be looking to get Selhurst Park rocking as they take on an Arsenal team desperate to prove they are the real deal.

If Arsenal is to come away with a win it is very important that they score first, as falling behind as they did last weekend to Slaven Bilić’s men could bring on a dose of the nerves that could cause Arsenal to self-destruct as we have already seen them do in the past.

This match is almost a must win for Arsenal, so for that reason we are backing the Gunners to come away with the win at odds of 8/11 with BET365.

Returning for Arsenal will be Spaniard Hector Bellerin, who missed last weekend’s game with a thigh strain, and despite Chilean forward Alexis Sanchez looking a bit sluggish when he came on as a substitute, we expect the Copa America winner to get the start.

Danny Welbeck, Jack Wilshere and Tomas Rosicky are still all unavailable, and while Rosicky will be out for two-months following surgery, Jack Wilshere is back in training with his injury not as bad as was first feared.

It has to be said that one of the biggest disappointment for fans last week was the performance of Petr Cech. Wenger will stick with the 33-year-old former Chelsea man though, after what appeared to be teething problems with his new club.

Laurent Koscielny and Per Mertesacker should keep their places as Wenger’s first choice centre-back‘s, but should Mertesacker fail to perform well against Palace, Wenger knows he has Gabriel Paulista waiting in the wings. Making up the back-four will be the returning Bellerin and Nacho Monreal, despite the Spaniard failing to stop Cheikhou Kouyaté from scoring the first of West Hams two goals.

We expect to see defensive midfielder Francis Coquelin in front of the back-four, while Wenger gives the nod to Aaron Ramsey over Santi Cazorla hoping that the Welshman’s drive can open up chances for Ozil, Sanchez and Alex Oxlade-Chamberlain.

Last weekend Wenger went for Olivier Giroud over Theo Walcott thinking that the big Frenchman posed a bigger threat, and may do so again saving Walcott to come on as an impact sub should the Gunners find themselves needing a goal.With limited strikers available and only two weeks remaining in the transfer window fans will be hoping that Wenger will bring in a known goal scorer before the window closes at the end of the month.