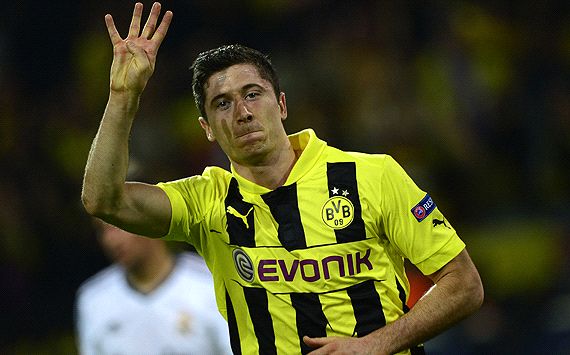 Robert Lewandowski has claimed Real Madrid simply did not know how to deal with him and Borussia Dortmund after their 4-1 destruction of Jose Mourinho’s side on Wednesday night.

The Poland international gifted Dortmund an early lead in the first-leg of their Champions League semi-final, before Cristiano Ronaldo levelled the scoring in the dying minutes of the first half.

Nevertheless, Dortmund then stepped up their game after the break as Lewandowski netted three more to leave BVB on the brink of the Champions League final.

“We played really well in the second half and Real Madrid had no idea how to deal with us. We scored three goals and played unbelievably well,” Lewandowski told Uefa.com.

“It was almost perfect. Obviously I’m delighted because we won 4-1 and it was an outstanding performance, but we’re not in the final yet.

“We’ve made great strides tonight, but we need to be alert from the very first minute in Madrid because they’re still very dangerous.

“We’re a good team and we’re not afraid of Real Madrid, but we’re going to have to play very well over there.”

Lewandowski, 24, has netted 10 goals in 11 Champions League appearances so far this term.