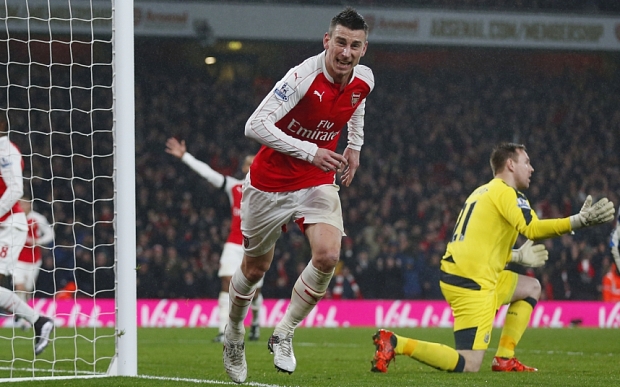 Arsenal defender Laurent Koscielny came to the rescue this afternoon in a wet and soggy Emirates stadium, where thanks to his 72nd minute winning goal, Arsenal came away with more than their display deserved.

Arsenal hardly looked like a side that is now two points clear on top of the Barclays Premier League following a lacklustre display against Newcastle United, in which Steve McClaren’s Magpies could have so easily stolen all three points but for some poor finishing from Georginio Wijnaldum and Aleksandar Mitrovic.

In fact of the two teams, it has to be said that Newcastle appeared to want the win more, as Arsenal not only struggled with the wet conditions, but appeared to be running on tired legs, another reminder as to why Wenger must increase the squad this month.

Gunners centre-back Laurent Koscielny once more found himself in the right place, at the right time to score Arsenal’s crucial goal, just as he did in the final match of the 2013 season to book Arsenal a place in the Champions League as per arsenal.com.

Following today’s match Koscielny told the BBC via the London Evening Standard: “We need to be focused.

“Sometimes you can play well, today we didn’t play well at times, but we won and that’s the most important thing when you are fighting for the title.”

In their last seven Premier League games Arsenal have only dropped four points but now face a run of fixtures against Liverpool, Chelsea, Leicester and Manchester United that could decide if Wenger’s men have what it takes to win the title for the first time since 2004.