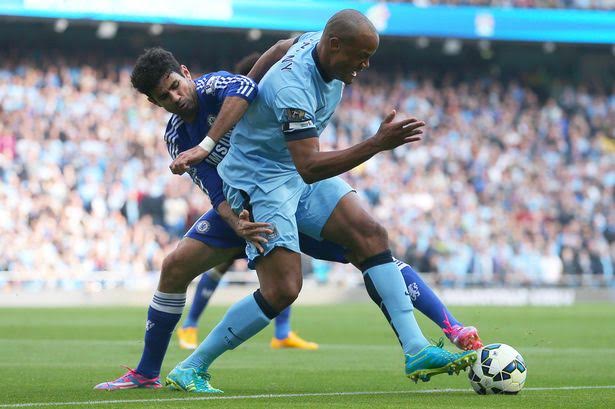 Manchester City defender Vincent Kompany is ready to prove this afternoon that his best days are not yet behind him by making Chelsea striker Diego Costa’s life hell this afternoon when Chelsea visit the Etihad to take on the team many consider to be Chelsea’s main rival for the Premiership title, Manchester City.

Belgium international defender Kompany has revealed that the way to keep the Brazilian born striker quiet is not to be taken in by his dirty tricks.

Last season Chelsea and City battled to two 1-1 draws, and we do not see it being any different this time around either knowing that Blues boss Jose Mourinho will be willing to park the bus should Chelsea manage to take the lead which is why we are betting a 1-1 draw with BET365 at odds of 6/1.

When asked about Chelsea striker Diego Costa, Kompany had this to say: “He (Costa) has an edge to his game that makes him a player to be careful with.

“His record speaks for itself. It’s all you need to know about him. He finds these pockets and is incredibly efficient and deadly.

“Sometimes don’t get involved too much. Play the right amount of game with him and focus on what you have to do after that.

“I think he’s a special breed of striker. (Wayne) Rooney has that edge, so does (Luis) Suarez.

“They want to use more than just their feet to get their goals – but I like it. It’s one side of the game I enjoy.

“Playing against those strikers you can never predict the outcome because they’re just so good that if I’m having the best game of my life they can still score a goal.

“But I can be tough also so I guess it goes both ways.”