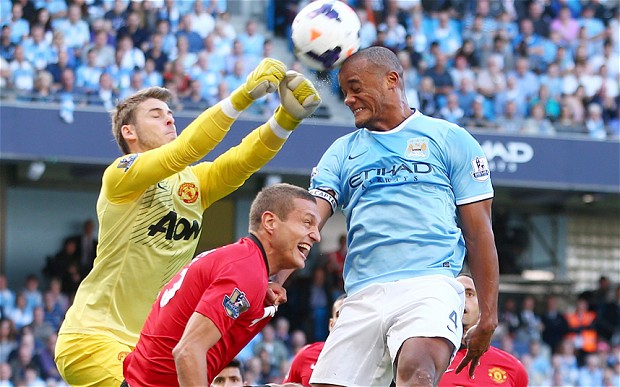 Manchester City thrashed cross town neighbours and reigning Premier League champions Manchester United on Sunday 4-1, which has prompted City captain Vincent Kompany to say that it is still too early in the season to say whether it was a defining game or not.

Manager Manuel Pellegrini can be proud of his team after an absolutely superb performance that had them not only looking like potential Premiership champions but possibly Champions League winners as well.

Kompany thinks that a victory for City was very important and that the team had out there wanting to win the match more than United did while at the same time praising his teammates for keeping their cool.

“Maybe the game meant a bit more to us than to them,” Kompany told Sky Sports. “We’ve been looking forward to this fixture, and our fans have been speaking about it for a long time – and we need to win those kind of games.

“We’ve got an unbelievable home record and there’s no reason why we should fear the opposition, even though they are very good.

When talking about the team as a whole the captain had this to say: “We did play with two very good strikers. Defensively, we’ve had a very good record for the past three years, so we knew that we could attack and we could defend. Mainly I think we stayed so calm.”

When asked if City’s decisive win was a statement to others Kompany said:

“I think you make a statement over the whole season. It’s too early to say if it’s a defining game.

“But it would be silly to give away those very precious three points. We need to win the next games, and then we’ll enjoy what we’ve done today.

“It’s only three points, but it gives us all the confidence and allows the fans to celebrate for a few days.”