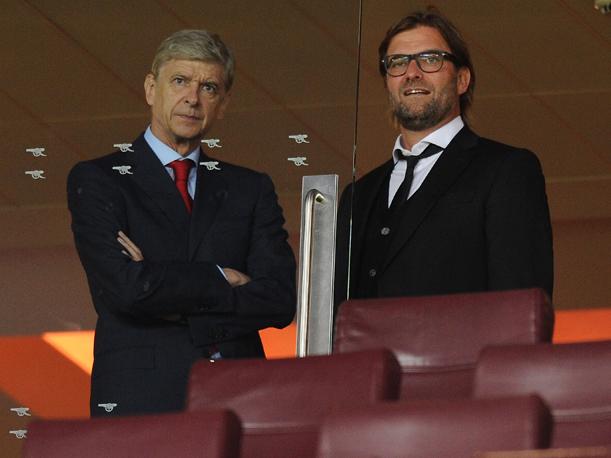 Borussia Dortmund manager speaking ahead of Wednesday night’s Champions League match with Arsenal talks about the differences between his team, and Arsene Wenger’s Arsenal.

‘He is really something. I love him. He is Sir Arsene Wenger. He is “hello (making a handshake gesture)”. I’m this guy,’ Klopp continues as he makes a high-five gesture.

‘But he likes having the ball, playing football, passes… it’s like an orchestra,’ he adds, gesturing as if playing a violin, ‘but it is a silent song. I like heavy metal more. I always want it loud.

‘I like (Arsenal’s philosophy). I love it but I cannot coach it because I am a different guy. If you watch me during the game I celebrate when we press the ball and it goes out.

‘To enjoy football you have to do this,’ pointing left-right, right-left, ‘he can win, he can win, post, goalkeeper, save — that is what I love. If, in the last four years, Barcelona were the first team I saw playing when I was four years of age — this serenity of football, they win 5-0, 6-0 — I would have played tennis.

‘It is not my sport. I don’t like winning with 80 per cent (of possession). Sorry that is not enough for me. Fighting football, not serenity football, that is what I like. What we call in German “English” — rainy day, heavy pitch, 5-5, everybody is dirty in the face and goes home and cannot play for the next four weeks.’

The key to Dortmund’s success is effort and hard work.

‘I am a very emotional guy. What I love, I do with all I have,’ he says. ‘I fight for justice. It’s a very important point for me. You give all… there’s no guarantee that you get all but if you give all maybe you can get something.

‘It’s not the most important stat but I love it when I read that we run more than the opponent. You can get respect if you do this and you have more chance to be successful.’

It is this sense of never being able to count Dortmund out with their blend of high passion defending and attacking that has won them so many fans who want to support the poor guy going up against the rich establishment.

Dortmund cannot compete with Europe’s elite money clubs when it comes to transfer fee’s so they have found another way to become successful by winning the Bundesliga twice in the past three years.

They are the constant underdogs to the bigger clubs in Europe, yet they fear no one, and when you listen to their manager describing how it feels to play in the Westfalenstadion you start to understand why when he talks about the all standing section of 25,000 fans known as the Yellow Wall. ‘It’s very narrow,’ he says. ‘It’s a bit like when you are born and your mother is… (he makes a face as if in pain)… and then you come out and see the best of the world. It’s everything, like the sun going up.’

‘We want this club to stay in the race against these unbelievably strong teams,’ says Klopp. ‘There is no chance to be the best team in the world in the next 50 years like Barcelona or Bayern Munich. We need too many things.

‘The more interesting thing is that we can be a team which can beat the best in the world. You always want to beat the team with more money. What we have done in five years is write a history, a story that maybe in 100 years people will know about.

‘We can go now and try to do the same at another place… but we have started this and now we have the chance to make the next step.’

Klopp also faces the reality of knowing that his top players leave when the big clubs offer more money, yet could you imagine if that was not the case and Klopp had the resources available.

Klopp, however, thinks of the situation in a different way when he says: ‘I’ve never thought about my dream team. The dream team was the Harlem Globetrotters. I don’t want to have the most money because you get problems with this.

‘If you have 25 super, super superstars each morning you get up hoping one of them is ill. Maybe today one of them, what’s his name, will have a cold (he fakes sneeze). “Ah, you, I’m sorry, you cannot play at the weekend.” You hope that because you need a reason to take him out of the team. I don’t want these problems.’

When you hear Klopp speak about football and his passion for the game it is no surprise that so many teams would like to have the German as their manager.