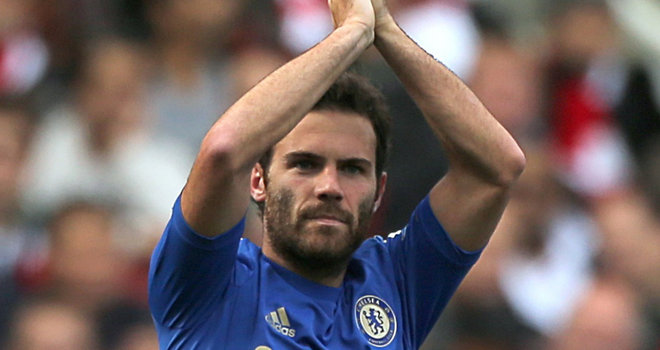 Chelsea midfielder Juan Mata has said that he is not worried about competition for places at the club and will concentrate on how to become a better player.

Brazilian midfielder Willian is Jose Mourinho’s latest import following on from the signing of Andre Schurrle from Schalke, and the return of Kevin de Bruyne who had been on loan at Werder Bremen.

Oscar and Hazard are the preferred starters for the Portuguese manager, with Mata not getting the nod yet after his fitness was interrupted by an injury.

Now fully fit and ready to play he says that having so many talented players at Stamford Bridge can only benefit Chelsea as they challenge for the title.

Mata told Sky Sports News: “I think it is very good for the club, for the squad and for the manager.

“I think they are really good – De Bruyne, Schurrle, Willian, they are quality young players. Each one has his different position, his different skills, but I think all of them can give us a lot and I think it is better to have a more complete squad.

“I wish we could play six together but it is not possible. But it is good for the club for all the competitions we have to face this season.”

Asked if he thought he would be playing regularly, Mata replied: “I am very optimistic and positive. To be honest it has been a difficult position for me with an injury so I could train less than my team-mates, but now I am feeling better and I am looking forward to playing.

“I will try to do my best like in the last two seasons and try to win and score and assist.”

Ehen asked what Mourinho had said to him Mata replied: “We spoke about it and he said I was very important for him and for the squad, so my aim hasn’t changed. I want to be as good as I was in the last two seasons and even improve, to become a better player.”