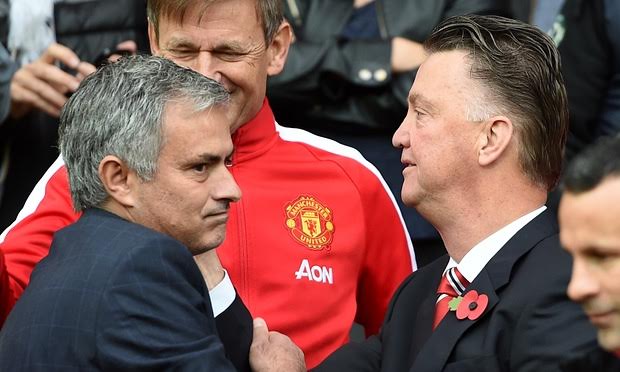 Former Chelsea boss Jose Mourinho has told the bosses at Old Trafford that he is quite prepared to wait until the end of the season before taking over from Louis van Gaal at Old Trafford, but that he will not be left in limbo over the summer, while not knowing what is happening according to the Guardian.

As things stand right now the Portuguese manager could have his answer this week should the Red Devils fail to beat Shrewsbury Town in tonight’s FA Cup clash, or get knocked out of the Europa League by Danish minnows FC Midtjylland Thursday night at Old Trafford.

If Manchester United stumble in either of their next two games and Louis van Gaal remains in charge for the upcoming Premier League match with Arsenal, it would be fair to assume that the Dutchman would then see out the rest of the season before stepping aside.

Over the weekend Mourinho was in Milan to attend Inter’s game against Sampdoria at the San Siro as the guest of former Inter owner Messimo Moratti.

Following the match during an interview club director and Moratti’s sister, Bedy she let the cat out of the bag when she said Mourinho would not be coming back to Serie A, because he would be taking over at Manchester United.

So now we know Mourinho will be the new boss at Old Trafford, but what about Ryan Giggs?