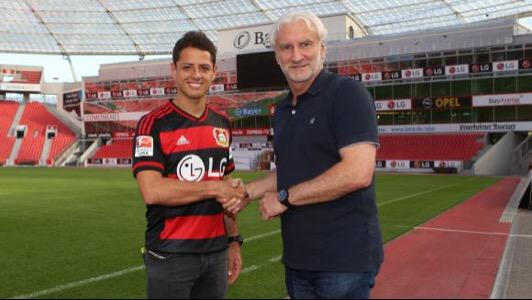 Former Manchester United striker Javier Hernandez has revealed that his desire to play in the Bundesliga was the main reason why he left Old Trafford.

The Mexican international striker has completed a transfer to Bayer Leverkusen in a deal believed to be worth £12m.

The 27-year-old, who was wanted by West Ham and Tottenham this summer, but has now, signed a three-year deal with the German giants Bayer Leverkusen.

Chicharito found game-time under boss Louis van Gaal hard to come by and was reportedly told to find a new club by the 64-year-old manager recently.

Now, Hernandez has done just that and he can’t wait to experience a new challenge in the German league.

He told Bayer’s official website: “I know the English Premier League and the Primera Division in Spain, two of the three major European leagues. Now I want to experience the Bundesliga.

“It’s wonderful that I get to play for a club like Bayer Leverkusen.

“It’s a great opportunity for me and I want to achieve something here.”

United posted a message on their website wishing Hernandez well: “Everybody at Manchester United would like to wish Chicharito the very best of luck for the future.”