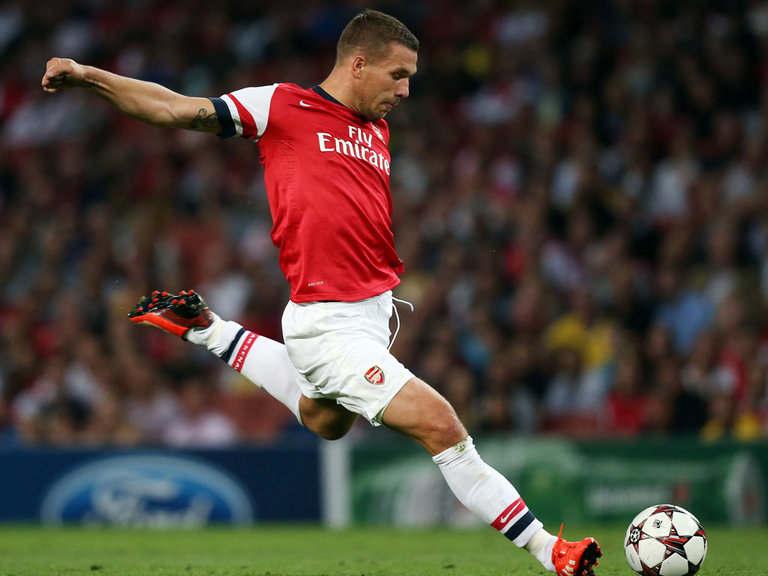 Arsenal forward Lukas Podolski has according to the Daily Mirror said that should the Gunners fail to qualify for next seasons Champions League that it will be a disaster for the club.

While the German international acknowledged that ending Arsenal’s nine year trophy less run by winning the FA Cup would be wonderful yet feels that finishing in the top four must be a priority.

After being forced to play extra time before beating Wigan on penalties Podolski knows that there will be some tired legs on the pitch when they take on West Ham Tuesday night knowing that Everton moved above them into fourth place after winning 0-1 away at Sunderland over the weekend.

Podolski said: “Every season is a pressure when you don’t win anything and the newspapers speak about it, the fans gets nervous but we have the chance this year to win the FA Cup so maybe it helps the club, us and the boss.

“But the other important thing is to get fourth place back because when you don’t play in the Champions League, it’s a disaster.

“Last season was the same. People and the newspapers speak about the last trophy being 2005 so of course, the pressure is there because we were in the semi-final and we have this chance to win the cup.

“We are now in the final and of course we want the cup, but the other important thing is the league. We don’t forget that because we are fifth now, so it’s important to get fourth place back.

“But as I say, the important thing is the league as well. We don’t forget the league because we are fifth now, we are not qualified for the Champions League, so we must do our work on the pitch – starting on Tuesday and this is an important thing.”

The German also admitted his frustration after being substituted for Olivier Giroud at Wembley while youngster Yaya Sanogo stayed on the pitch.

He added: “I play and in the last games, I always come out and of course you cannot be happy when you always go out after 60, 70 minutes.

“When you go out and you are happy, you are not a footballer so of course I am not happy always to be substituted. It’s the decision of the boss, he is the manager. He decides who comes in, who comes out, who are the first XI.

“It’s not always easy when you play for a big club but of course I am not happy to always come out and watch from outside. You cannot be happy with this situation.”