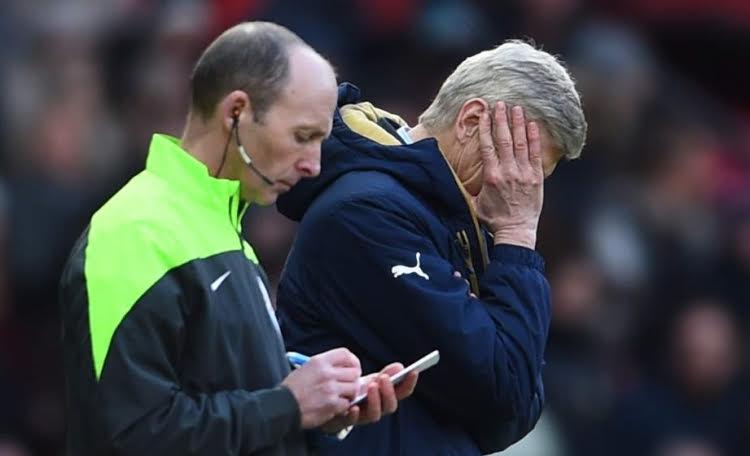 Yesterday’s loss to a youthful Manchester United was more than most Arsenal fans could take, yet another bitter blow to a season that was shaping up to be the Gunners best in years.

To make things worse it was not just Arsenal’s poor performance but Wenger’s defence of it that has us so mad following the Frenchman’s comments that he could not fault his side’s commitment in the match saying: “Our spirit and commitment was 100 per cent there but it’s difficult to win away from home when you concede three goals.

“We were strong enough but they stopped us a lot with little fouls. That was very frustrating. I could not question our desire or commitment at all.”

Please, Please Mr. Wenger were you watching the same match we were? Arsenal looked half-hearted and were playing as though the expected it to be a stroll in the park following Manchester United’s poor form all season, never mind the fact they were having to play a makeshift back four and an 18-year-old who was making his Premier League debut.

We were not alone in our disgust of the Gunners performance with club legend Ian Wright wading in with his thoughts saying that Arsenal had let a massive chance slip away.

“I simply can’t understand that,” said Wright. “Arsenal scored two goals without trying too hard – that was how weak Man United’s defence was.

“If they’d really had the desire and commitment of a team that needs to win a game [they would have scored more].

“To hear him say that, I don’t know. It’s like when naughty kids come round your house. If you continuously let them get away with doing naughty stuff, they’re going to keep doing it.

“Him saying stuff like this makes them think, ‘Oh it’s OK’. But they should be going back on the coach thinking, ‘I had an opportunity today’.

“They should have taken that opportunity.”

The loss now means that Arsenal are five points behind league leaders Leicester and three points behind North London rivals Tottenham who they play on Wednesday night.

To be quite honest this could be a do or die match for Arsenal and if they do not put in a performance that we cannot criticise, we will be among those calling for Wenger to step down and let a younger more ambitious man take over at the Emirates.