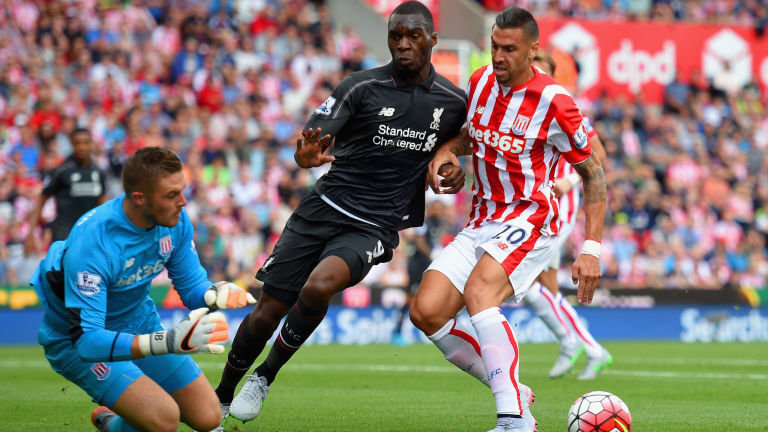 Liverpool manager Brendan Rodgers played five of his new signings against Stoke City on Sunday afternoon, so we thought it would be interesting to report on how we thought the new boys performed against a Stoke side, who just like Liverpool were eager to start the season with a win.

Full-backs Nathaniel Clyne and Joe Gomez were all given a start, as was former Manchester City midfielder James Milner and Aston Villa striker Christian Benteke, while former Hoffenheim midfielder Roberto Firmino came on as a substitute with just 12 minutes remaining in the match.

True to his word of allowing youngsters to play Liverpool manager Brendan Rodgers gave 18-year-old Joe Gomez the start over Spaniard Alberto Moreno at left-back, and the youngster did not let the Reds boss down handling Stokes Jonathan Walters like a seasoned pro.There were a couple of moments where his inexperience showed including a mistimed aerial challenge that presented the Potters with a chance.Gomez however did not look out of place and handled the physicality of Mark Hughes team well, while also looking confident while bringing the ball out from the back.Former Liverpool defender Jamie Carragher, who knows Walters, had this to say about Gomes after the match: “Gomez has handled Walters – who is a nightmare to play against – very well. He’s looked very assured.”

29-year-old Milner looks like a player that has been given a new lease on life since joining Liverpool, with the ex-City man covering more ground, and making more tackles than any other Liverpool player on the pitch.He did however pick up a booking for a tough tackle on Charlie Adam, while also leaving Ibrahim Afellay something to think about after an aerial challenge that left the Stoke player needing treatment. Milner certainly left his mark on the game and is a player not just the Liverpool new boys can look up to, but some who have been at Anfield for some time.

The former Southampton player looks like he has been playing for Liverpool at least a couple of seasons, after having settled in so well, and one of the reasons we think the 24-year-old was Rodgers best summer buy was the fact he had more touches of the ball than any other Liverpool player with 83.If we would have to be critical of Clyne, it would be the fact he never managed to get a cross into Stoke City’s box, and improvement we would like to see from the England international when the Reds take on newly promoted Bournemouth at Anfield next Monday night.

While we did not see a goal from the £32.5 million signing, the big Belgium did just what he was supposed to do by occupying the Stoke back four who at times looked terrified of the 24-year-old striker.“I thought Christian was outstanding. His touch, his hold up play, his movement in behind… he occupies a whole back four on his own at times.” Brendan Rodgers heaped plenty of praise on his new £32.5m striker after the final whistle. One thing we picked up on was that Liverpool goalkeeper Simon Mignolet actually sent balls long looking for his countryman to get on the end of a new facet to Liverpool’s play that we had not seen before.Sky Sports pundit Graeme Souness also picked up on this as well saying: “Now they have an alternative they should use it.” “You must mix your game up. If you become too predictable and it’s rolled out every time from the back, the opposition midfield will be on you and keep you in there. You end up making all your passes in your own half or on the halfway line.“Everyone is obsessed with playing like Barcelona today. But not everyone has an Andres Iniesta or a Xavi. That’s the correct way to go about your business if you have Benteke.”

Brazilian Roberto Firmino meanwhile made a late cameo appearance for Liverpool as the former Hoffenheim star looks to regains his match fitness following a late holiday after the Copa America.His pace was immediately there for all to see, but given the short time he was actually on the pitch, all we can say that his future at Anfield has us all expecting big things.