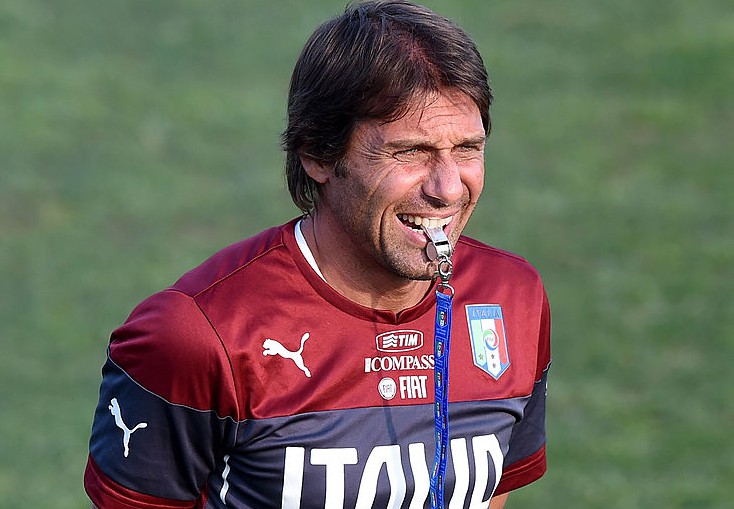 After all the latest talk it would appear as if Italian national team trainer Antonio Conte will be Chelsea’s new manager tasked with the job of taking the team not only back to their rightful place in the Premier League but on to European glory as well.

One thing Chelsea fans should be aware of is the fact that the trainer has done this job before taking Juventus from a team that finished in seventh place in Italy’s Serie A two seasons in a row to the league title without losing a single game.

As Chelsea fans prepare for what we expect will be a summer of transition as stars such as Eden Hazard are allowed to leave, we thought it would be interesting from what we know of Conte to try and guess at how the Italians new team will look.

During his time in Turin Conte was known for playing a 3-5-2 formation, but since taking over the Italian national team he now prefers to go with a 4-2-4 line-up which we expect him to continue playing at Chelsea.

At the back Chelsea goalkeeper Thibaut Courtois might look for a move away as some of his fellow teammates leave the club after having found themselves surplus to requirements, but with the Belgium international under contract until 2019 we do not see him going anywhere.

Club captain John Terry will certainly be moved on given his age with Italian Leonardo Bonucci the perfect centre-back to replace the club veteran having already played for Conte at Juventus and also with the Italian national team.

Also on his way out will be Serbian right-back Branislav Ivanovic with Conte looking to replace him with Ivorian international Serge Aurier. The 23-year-old Paris Saint-Germain defender has fallen out with trainer Laurent Blanc at the French champions and while his comments off the pitch have caused offense you cannot deny he is a top quality right-back.

The biggest changes however are reserved for the Blues midfield with the likes of Oscar, Cesc Fabregas, John Obi Mikel and Nemanja Matic all finding themselves on the transfer list as the Italian boss looks to help finance his new acquisitions.

In we expect to see AS Roma pair Miralem Pjanic and Radja Nainggolan with Conte also going all out to get French youngster Paul Pogba to join him in West London.

Having watched all of Chelsea’s matches this season we have no doubt that Brazilian playmaker Willian will be named the Blues player of the season, with the little midfielder set to fit prominently in the Italians plans for the club.

Wide right, and don’t dismiss this out of hand given what we have seen of him so far could be the rebirth of Colombian winger Juan Cuadrado who is still on Chelsea’s books despite Mourinho’s desire to try and sell him back to the Italians.

As for strikers Diego Costa appears to have found his old form under Guus Hiddink and while there has been talk of him returning to Atletico Madrid we are sure Conte will try and convince him to stay.

As we have seen this season Chelsea has come up short in the striker department, and with Edinson Cavani reportedly fed up of playing out wide for PSG, the Uruguayan hit man could become the new Blues bosses marquee signing.

Have a look at our line-up below, and see what you think of our predicted team.