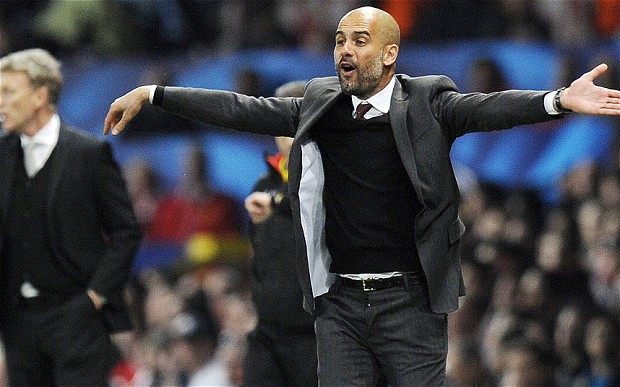 Pep Guardiola’s Bayern Munich came to Old Trafford fully aware that they were the favourites in that particular encounter. Everything was sure in their favour. They dominated almost every second of the game. They had an overwhelming possession of the ball (about 80%). Yet they failed to get a win.

The hosts opened scoring in the 58th minute when United’s captain Nemanja Vidic leaped high to connect with Wayne Rooney’s corner kick to put the Red Devils ahead. Bastian Schweinsteiger made it level for the visitors. Schweinsteiger was later sent off for a second booking and the German side ended the game with 10 men.

Manchester United may have been able to get a result against the invincible Bayern Munich but they are still the underdogs when they go the Allianz Arena in a forth night.  Pep Guardiola, who is hoping to repeat the treble feat of his predecessor, found United’s defence very difficult to crack.

“It’s not easy against a team that put so many bodies behind the ball. We scored an away goal. That’s important,” he said.

“We will try to win the return leg. I have complete faith in my players.

“We scored an away goal, which is important, but we also got lucky that efforts from (Danny) Welbeck and (Wayne) Rooney did not go in. The goal we conceded was difficult to defend.

“It is always dangerous when you go into the second leg with a 1-1 draw, but even a 2-1 victory would have been dangerous.

“I am sure we can do it. I have full confidence in my players and hope the fans in Munich will push us like the United supporters did for their team.”

Evidently it was not an easy ride for the visitors as they might have expected.