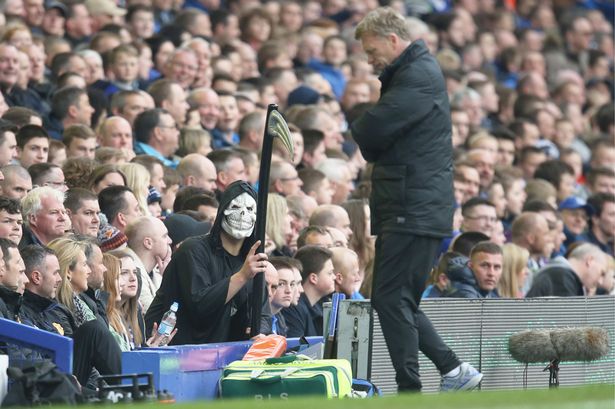 While many Manchester United fans think that David Moyes should be fired as the coach on Manchester United following their worse season in a decade a fan turned up yesterday at Goodison Park dressed as the grim reaper complete with a black hooded robe and an inflatable scythe to remind the Scot that his time at United was coming to an end.

The man dressed as death haunted the under fire Moyes until eventually being thrown out of the ground by stewards after 20 minutes.

In the end the whole thing turned out to have been staged by betting company Paddy Power as a publicity stunt issuing a statement that read: “Paddy Power sent their very own Grim Reaper into Goodison Park this afternoon, sitting just a stone’s throw away from the troubled United manager.

“Paddy Power’s Grim Reaper, the black-cloaked, scythe-wielding personification of when your time is up, signalled what many United fans – and the bean-counters at Old Trafford – are thinking.”

Everton won the match 2-0 to keep their hope of Champions League football alive while Moyes and United seem destined for an eventful summer.