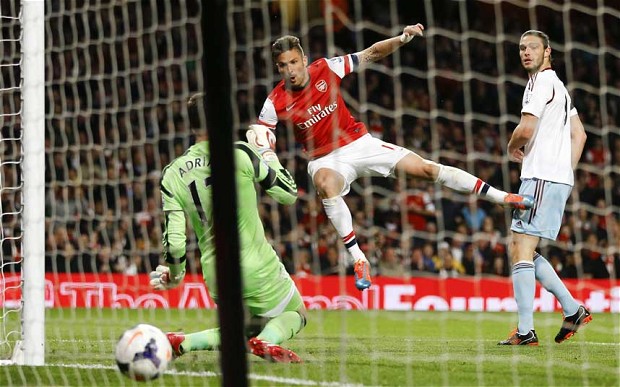 After scoring a brilliant goal to give Arsenal the lead in last night’s 3-1 win over West Ham at the Emirates French striker Olivier Giroud admitted that the Gunners must now play to win every match if they want to compete with Europe’s elite next season when speaking to the Daily Mirror Giroud said:

“In my opinion, we have four finals to go in the Premier League – and one in the FA Cup [Arsenal face Hull in next month’s final, aiming to end a trophy drought dating back to May 2005].

“We have to win every single game and we will be expecting a mistake from Everton.”

Giroud dedicated his stunning goal to the families of the Hillsborough disaster on what was the 25th anniversary of 96 Liverpool football fans losing their lives in Sheffield.

He said: “I didn’t know exactly the story. I heard a few days ago and I was really sensitive to it. I just wanted to give pay homage to them.”