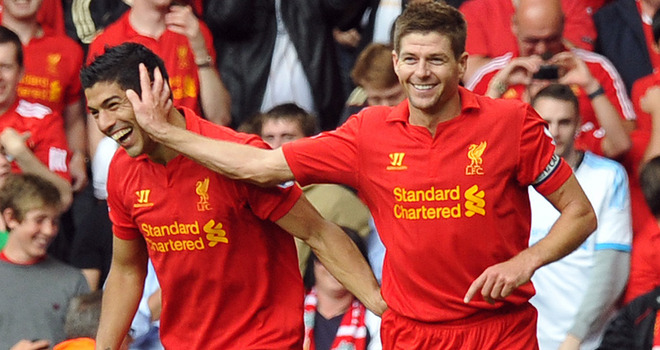 Liverpool captain Steven Gerrard has told unsettled striker Luis Suarez to give the Reds one more year, and then move to Spain or Germany, but not to Arsenal as that would be a sideways move.

Liverpool rejected a bid of just over £40 million from Arsenal for the Uruguayan striker and have been firm is their remarks saying that Suarez was not for sale, and especially to a club that they see as a rival such as Arsenal.

Gerrard said: “I didn’t ever think Luis would leave – well, not to another English club anyway.

“I don’t want to disrespect Arsenal, because they are a fantastic club, but I don’t see joining them as being a step forward for Luis.

“There are only really two or three clubs he should leave this football club for if he is taking a step forward.

“If we don’t qualify for the ­Champions League this ­season he can go to Real Madrid, ­Barcelona or Bayern Munich – and he can go with his head held high.

“The one thing I can assure you, it’s not about money with Luis Suarez.”

Gerrard added: “I understand we’re a little bit off the Champions League here at the moment, but I think he would ruin the relationship he has got with the supporters here if he went to another English club.

“I saw what happened to Fernando Torres. I didn’t want Luis to make the same mistake and that’s the advice I gave him. He’ll have another chance to move forward to a club that he deserves to be at.”