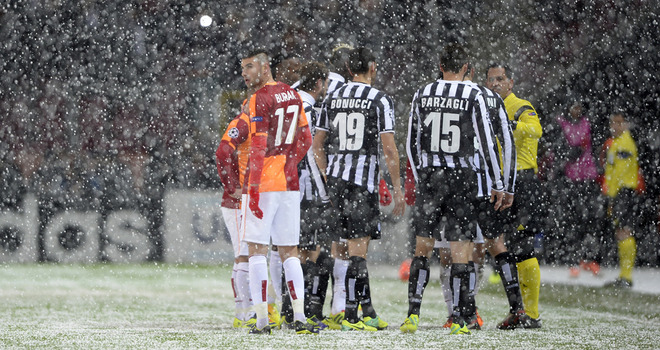 Last nights Champions League match between Galatasary and Juventus in Istanbul was abandoned due to a sudden blizzard in the capital that made the game unplayable.

As can be seen in the photographs the pitch was perfect at kickoff, but suddenly an eight minute deluge of snow and hail made the lines no longer visible forcing the officials to stop play after only 30 minutes.

Many people are wondering why the game had to be abandoned especially after the World Cup qualifier that was played between the U.S.A and Costa Rica went ahead in much worse conditions.

Perhaps the Refs need to spend some time watching the NFL to see how bad the conditions have to be before a game is abandoned.

Check out the video below of the match last Sunday in Philadelphia that went ahead despite the conditions.