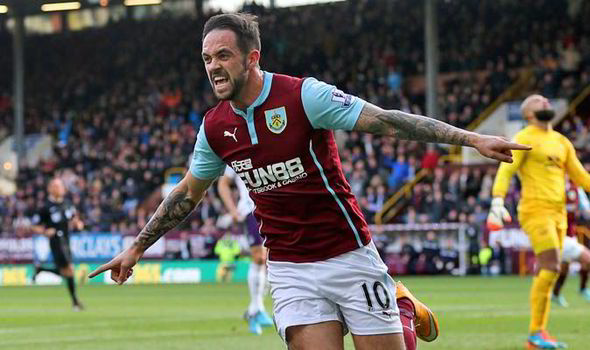 It is hard to get Liverpool fans to agree on most things, but when it comes to signings it is a case of being brilliant or making a terrible mistake. The Reds have been linked with Burnley striker Danny Ings for some time now even trying to get the youngster to join them in January so there has been plenty of time for fans of the club to assess if they think the Burnley man will be a good fit at Anfield.

Below are four reasons as to why we think Liverpool will follow through on their interest and sign Ings this summer.

He is young at only 22-years-old seems open to improving his game and can be had for a very good price.Last summer following the departure of Luis Suarez manager Brendan Rodgers deviated from his plan of only signing young players on reasonable wages by signing first Rickie Lambert and then Mario Balotelli, both of whom have failed to deliver.Ings on the other hand can be signed for a few million and will not need to be paid anywhere near the amount Balotelli was earning.

He is a goal scorer in a club that lacks creativity

Ings has scored ten goals for a team that creates very few chances in his first season in the English top-flight, where as Liverpool create plenty of chances but lack the finishing touch which has been missing without Suarez and Sturridge. So in theory he could quite easy double his goal tally at Anfield given the support of Lallana, Coutinho, and Henderson. We deliberately left out Raheem Sterling from the equation as we do not expect to see him playing for Liverpool next season.

He is ready to hit the ground running

As we already know Daniel Sturridge will not be available for the first two months of the season, and with Balotelli, Lambert and Borini all expected to leave the Reds need a new striker from the off, and while they will have Belgium international Divock Origi, he unlike Ings has no Premiership experience. Whether or not Ings proves to be a starter when Sturridge is fit, he will still be an excellent player to have for Europa League and cup match.

He can score with any option

It would seem as though he is equally at home scoring goals with both feet and his head of the ten goals he scored this season for Burnley four have been from his right foot, three from his left and three from headers. In summary he possesses the predatory goal scoring instinct that Liverpool have been lacking this season, and wanting to prove the club has done well by signing him he will be eager to prove himself a worthy buy.