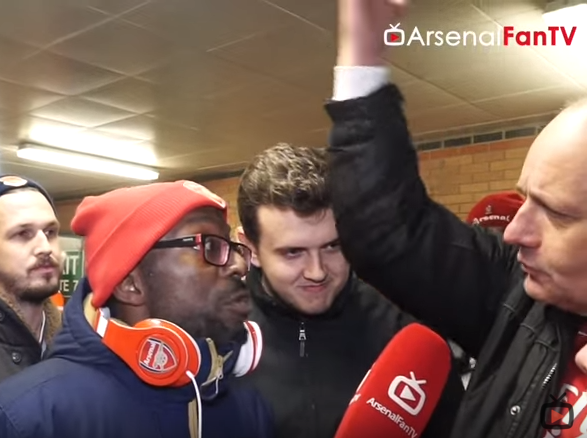 In what can only be described as yet another setback in their quest to win this season’s Premier League title Arsenal can look on Sundays 1-1 draw with Norwich as two points lost rather than one point won.

The Gunners endured a disappointing afternoon after having given up the lead and seeing Alexis Sanchez and Laurent Koscielny both suffer injuries.

If the Gunners performance on the pitch was not bad enough (our verdict on the match) just listen to how Arsenal TV celebrity fans Claude and Ty thought of the team’s performance.

Claude reacted to Ty’s suggestion that the team had not lost ground due to other leading teams other than Manchester City dropping points.

Claude: That’s not the point we need to take advantage of these situations.

Claude: We have lost. We dropped five points against two crap sides.

Ty: Go away. Why are you touching me?

Claude: You’re the most deluded fan of all!

Claude: You’re happy with a point at this sh*thole.

Ty: Did I say I’m happy? You’re the one that said that Tottenham could win the league and I’m deluded? What you on about?