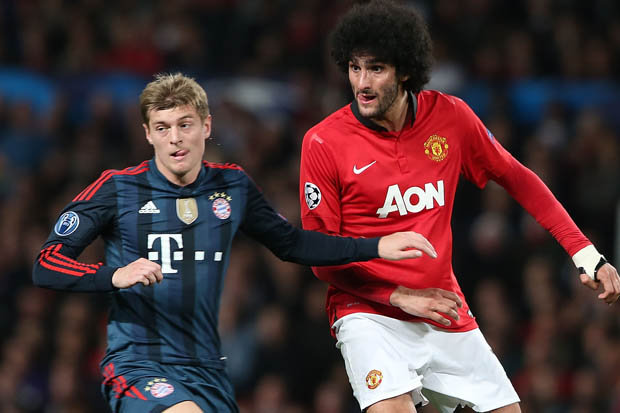 Marouane Fellaini has been awful since joining Manchester United from Everton for a price tag of £27.5 million which seems £20 million too much given the performances he has put in.

The big Belgium made the headlines once more for all the wrong reasons this morning following the performance he put in last night for Manchester United in their 1-1 Champions League first leg match with Bayern Munich at Old Trafford.

So bad in fact that when Spanish sports newspaper AS did their player ratings they didn’t even bother to include him with the other players.

AS were not the only paper either with German paper Bild who rate player on a scale of 5 to 1 with 5 being the worst and 1 the best. Needless to say the 6ft 4in Fellaini got a whopping worse mark of 5 for his dismal display.

While David Moyes takes the team to Munich for the second like he might well think about leaving Fellaini home as displays like last night suggest he must have other things going on in his head.

Following on from last weekend’s 4-1 win over Aston Villa the Daily Mails Adam Crafton got it spot on with his comments saying: ‘Still looks out of place in a United shirt. Clumsy in the tackle, unadventurous in possession.

‘Three starts in the past week suggests he will be spared a starting place against Bayern Munich on Tuesday.’

Looks like Moyes did not listen to the advice.