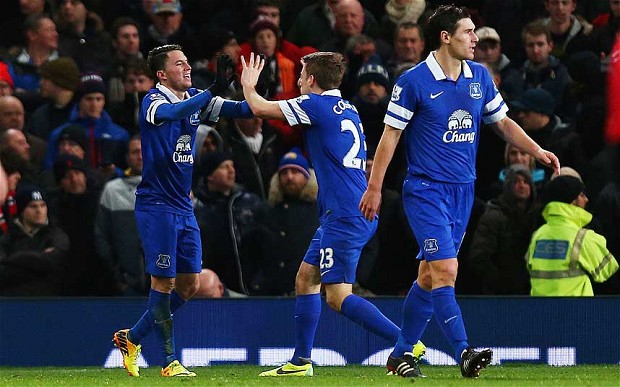 Arteta joined Arsenal from Everton in August of 2011 after playing six seasons on Merseyside where he was well respected by both his teammates and fans.

The now 31-year-old is pleased to see his old club doing well under fellow countryman Roberto Martinez, and has taken note over how the Toffee’s his former manager David Moyes Manchester United on Wednesday night.

Everton trail league leaders Arsenal by seven points, and after beating United at Old Trafford will feel that they can add Arsenal to their list of scalps as well, which is something Arteta is well aware of.

“Everton are having a great season and they have got great results against top teams, which is not easy,” noted Arteta.

“It was a big result (at Manchester United), it was massively important for them and will boost their confidence, so we are going to face a really difficult team for sure.”

Arteta added: “I know the fundamentals of the club and I was happy with the way they dealt with the transfer window.

“I think they did really well and improved the team compared to where they were before. They deserve to be (up) there.”

Arteta believes that it is competition for a place in Arsene Wengers team that has helped the Gunners get off to such a good start this season.

“We have struggled in the last years a little bit to do that because of the numbers and injuries and now we have almost everyone fit, apart from Lukas Podolski and Alex (Oxlade-Chamberlain), that is a very good sign,” added Arteta.

“I think it (competition for places) is great. Everybody has to be on their toes and everybody is important.

Arteta is not worried that the current team has not won any trophies, and says it will not affect their performance.

“Does it matter we don’t have the experience of winning the title before? No – as long as you have the quality, the ambition and togetherness that we have, I think we are in a good position to do it,” concluded Arteta.